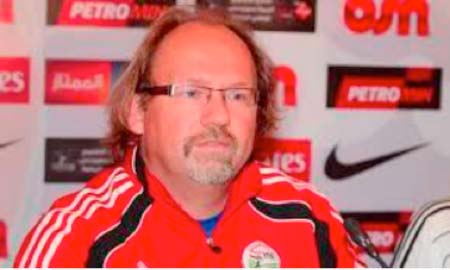 Coach Saintfiet was speaking to journalists shortly after his side 2-2 draw at home to Democratic Republic of Congo in the continent’s biggest football showpiece qualifiers played at the Independence Stadium Boardroom on Monday.

He said his side held current African champions Algeria to a 1-1 draw in both home and away legs of the 2019 Africa Cup of Nations qualifiers before drawing with Democratic Republic of Congo.

He revealed that Democratic of Congo have won bronze medal in 2015 Africa Cup of Nations, adding that they have players playing their trades in Europe top leagues.

He stated that Muhammed Badamoussi, Ngine Faye Njie and Abdoulie Jallow were all called up for the game but missed the tie due to injuries, adding that Assan Ceesay missed the clash after receiving  two yellows.

He said both Abdoulie Jallow and Ngine Faye Njie played very well in their match against Angola but missed the clash with Democratic Republic of Congo due to injuries.

He added that his team had created several goal scoring chances during the first and second half of the match but managed to score two goals.

'Police are in contempt of court'