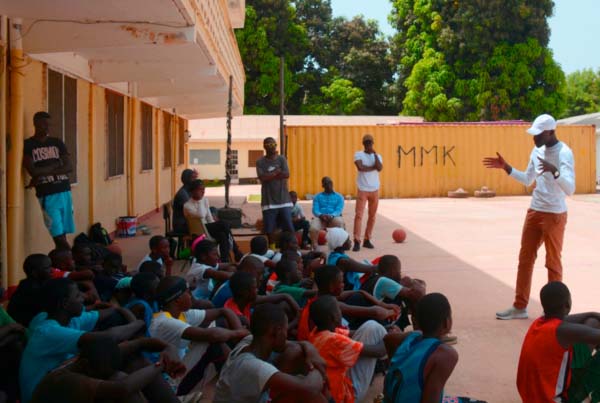 Ascend Together recently hosted a celebrity guest. One of Forbes’ 30 most influential African entrepreneurs under the age of 30, Momarr Taal is a rising star in The Gambia, having started a successful agriculture business, Tropingo Foods. Mr. Taal had a simple message for the young men and women in the Ascend program: you can make a life for yourself here in The Gambia, you don’t need to go to Europe to make money.

The Gambia has one of the highest rates of migration to Europe of any country in the world, losing on average 0.5 percent of its population each year to the “backway”, according to UNICEF. In 2016, 12,000 Gambians, mostly young men, arrived by boat in Italy, part of a wave of migration from Africa and the Middle East to Europe. Despite its small size (roughly 2 million people), Gambians are the 5th most common arrivals in Europe according to the International Organization for Migration (IOM), rivaling much larger countries like Nigeria and Syria. The effect on Gambian society is pervasive, particularly in the provinces, where you find villages where most of the young men have gone the “backway”.

And the route itself is dangerous. Young Gambians who take the “backway” are subject to kidnapping, torture, and murder while in lawless Libya, before risking their lives on a treacherous boat crossing to Italy where overcrowding often causes boats to capsize. Over 5,000 migrants, including Gambians, died in 2016 crossing the Mediterranean. The number of migrants killed or kidnapped in Libya is unknown, but almost every Gambian knows someone who suffered some sort of abuse or worse while in Libya.

The meeting pondered the question of why are so many young Gambians are risking their lives to get to Europe? The most common reason given by migrants is that there are no opportunities for young people in Gambia. Young people want to help their families financially and they see Europe as being the best way to do that, where the remittances sent home from even a low-paying job can go a long way in The Gambia.

As an organization that works with Gambian youth, Ascend Together recognizes that the migration issue needs to be addressed. So they called Momarr. Momarr Taal as living proof that one can make a life for oneself in The Gambia with a little creativity and a lot of hard work. So, sitting in the shade next to the YMCA basketball court, Ascend students listened to Momarr tell the story of how he started his life-changing journey by establishing his mango and groundnut processing export company.

“First of all, you can’t be afraid of failure. I’ve failed and failed, but I kept trying until I succeeded. I hear from Gambians all the time ‘Gambia amuut dara’; there’s nothing here. But look around you, we’re surrounded by mango trees. Gambia has a wealth of agricultural opportunities. Mangoes can be sold whole, as juice, as jam, or as a dried fruit. Even the mango pit can be pressed to produce mango butter, which is an important component of many cosmetics products,” he said.

When asked what business niches might exist that aren’t currently being taken advantage of by Gambians, Momarr said; “there are so many. One that comes to mind is refrigeration. Every hotel, fish plant, restaurant, needs access to refrigerated storage and there are only a few people doing it. Also there are so many agricultural opportunities. The Gambia has a great climate for growing rice. Gambians have historically grown rice. So why isn’t there a major Gambian rice company? I don’t want to eat Chinese rice; I want to eat Gambian rice.”

While these students may still be a few years away from starting a business, the message was clear: there are opportunities in The Gambia; you don’t have to go to Europe. And the wheels were turning. One student, Paul Mendy, asked why aren’t pineapples grown in The Gambia? Momarr’s answer: “someone like you needs to look into it. Maybe you can be the first person to start a pineapple company here.”