The celebrated Arabic pioneer Sheikh Oustaz Dumbuya has called on all businesspeople and those responsible for recent increments in the price of basic commodities to reduce prices. He made his comments in an exclusive interview with The Point. He said it essential that those in business show absolute sympathy to those less fortunate than themselves and the poor in society. "We should be mindful that the rising cost of food and basic commodities will have the most negative impact on poor people," he said.

According to him, the majority of Gambian businessmen and Muslims should help by stopping the increments in prices in the shops and the markets. He said that those who do make efforts of this kind will be abundantly rewarded by Allah. Sheikh Dumbuya appealed to government to set up a task force that would monitor the activities of businesspeople so that there can be a concrete price control system.He said it is shameful to see that fishmongers are now selling three pieces of fish for D100 while one kilogram of meat costs D75 in the market.

On the issue of foreign currencies depreciating against the Dalasi he said, " the Gambian government has worked tremendously to ensure that the Dalasi appreciated against major currencies therefor businesspeople have no cause to complain.

In conclusion sheikh Dumbuya stated that the business sector must redouble their efforts to reduce food prices for the poor masses in society for the love of mankind. 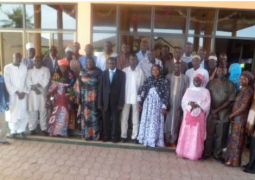