Malafi Kanteh, a musician with the Sehjo Band and the 14th prosecution witness recently testified in trial of 46 before the Brikama Magistrates' Court.

Testifying before Magistrate Effim, Mr. Kanteh told the court that he is an artist by profession and works with the Sehjo Band.

According to him, on 29th March 2008, they were performing at when he heard two boys saying they were going to attack . Consequently, he then informed his boss about it, who advised him to go back to as his families are alone at home.

Mr. Kanteh further adduced that he later called his wife to find out whether soldiers are in and she replied in the affirmative.

Still testifying, Mr. Kanteh told the court that on 30th March 2009, while in , he saw a group of people coming towards the village and upon arrival they started destroying houses, including his own.

"I was asked whether I did not have petrol and I responded in the negative," he told the court.

Under cross-examination by defence counsel, H B Gaye, the witness told the court that he knew the prosecution witness one (pw1), Lamin Jarju, whom he said had given him a wife.

As to how he acquired the land in , the witness said "it was given to me by Lamin Jarju."

When pressed further as to how he knew that the soldiers are in , in replied "I was standing outside and I saw some soldiers heading to ."

When asked by defence counsel that apart from the two boys he allegedly heard discussing about the attack, did he hear anyone talking about it. In response, he replied in the negative. 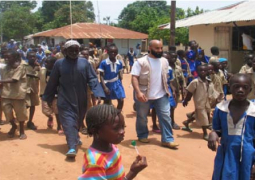