The Baja Kunda Health Centre in Wuli East District of Upper River Region has received a 22 million Euro boost from the AL PICAT Solidarity, a Spanish NGO, and the community of Baja, a gesture which has transformed the health facility with a new look.

Speaking to this reporter recently at the Health Centre, Mr.Abdoulie Jammeh Officer in Charge (a registered Midwife HND in Midwifery) revealed that the modern building commenced operation on . According to him, the project provided a new administrative building, out patient department, drug store, public health office, laboratory department, pediatric, male, female and children's wards. He said that the project also provided a space for ophthalmic and TB departments. A labour ward and information office were also created, he said. Mr. Jammeh expressed gratitude to the donors for giving the health post a new look and equipment. "Everybody here is happy about this gesture. There is comfort and a good working environment". He said that unlike the previous building, with only 9 beds, the new building has 27 beds excluding two other beds for postnatal observation.

He encouraged the communities to take greater care of the new facilities. Mr. Jammeh further revealed that the health centre normally received from 75 to 150 patients on a daily basis form different parts of the region and beyond. "With this new modern structure, my intention is to transform the health centre to become one of the best health centres in the region and even beyond". He said that initiatives like this could be used by the Spanish authorities to address the issue of illegal migration because it would create auxiliary jobs for many young people. He finally appealed to government to help the centre with more trained nurses and doctors.

For his part, Jesus Marco locally known as Isa Bajaga, a volunteer for the Spanish NGO, revealed that out of the total cost, the community of Baja Kunda provided 10 million Dalasis as their counterpart contribution. He further revealed that the project is also supporting the Baja Kunda Lower Basic school. He said that their future plan is to provide 24-hour electricity for the health centre and to bring some doctors from to come and share experience with their colleagues in Baja. Jesus also said that they also intend to provide a maternity room and an operating theatre for the health centre. 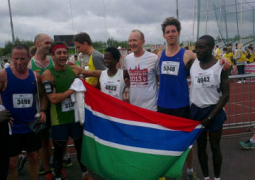