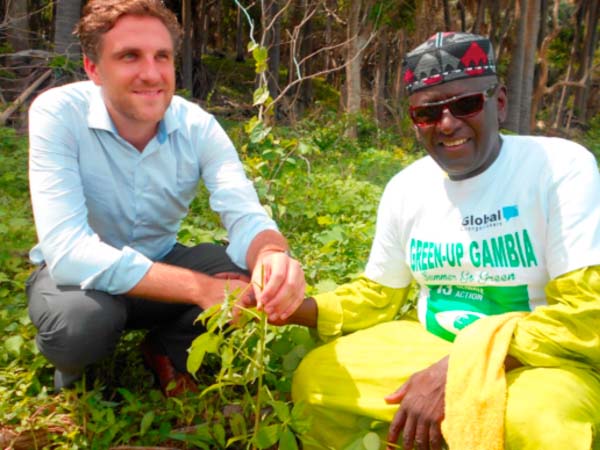 The chairman of wood-re-exporters and forest users association in The Gambia, Lamin Barrow and the General Manager of Mediterranean Shipping Company (MSC), Jakobe Nygaard, have both assured of their firm commitment to supporting the Ministry of Environment and its line department to join the crusade in the restoration of the forest cover in The Gambia.

The two delivered the reassurance during the official launching of the National Tree Planting exercise presided over by the Minister of Environment at the Bijilo Park over the weekend.

Speaking to the media, Jakobe Nygaard, a Danish, who is the General Manager of MSC in The Gambia, thanked the Minister of Environment for inviting him to participate in that very important national event.

He also thanked Lamin Barrow, the chairman of wood re-exporters and forest users in The Gambia for ensuring that he and his team participate in the national tree planting exercise.

He said MSC feel very delighted to partake in the restoration of the Gambian forest, recalling that few years ago the Bijilo forest park was very dark, but to his surprise, when he came back he saw the forest has been degraded seriously.

He divulged that MSC has contributed not only in assisting the workers but also provided some water, and huge number of seedlings.

For his part, Lamin Barrow, chairman of wood re-exporters and forest users association in The Gambia, commented on the importance attached to the national tree planting exercise.

He said they all know the usefulness of this forest in The Gambia and by extension to the animals, adding that the Bijilo Park was seriously destroyed by unscrupulous people in the past regime.

According to him, the government of the day with technical support from the ministry of environment and its line department has decided to replace what has been destroyed.

Mr Barrow also dilated on the need for collective effort to protect the park by replacing the lost trees, saying it was a way forward to have healthy forest cover that could attract tourists in investing in the country.

He also thanked The Gambia leader through the ministry of environment for these bold initiatives in launching the national tree planting exercise.

He assured the ministry of environment and the government of The Gambia that his association was ready to give maximum support in the restoration of the forest cover.

He advised his association members to be law-abiding and respect the law of the forest.