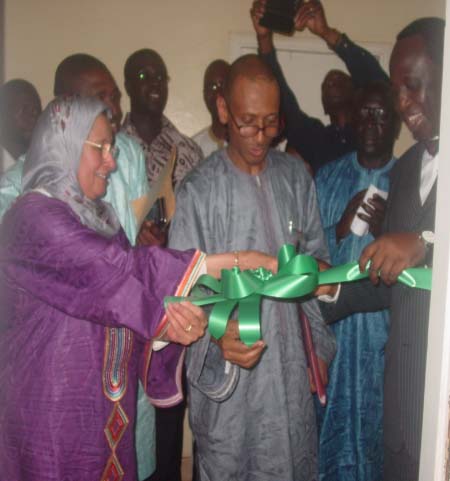 This was a project initiated in collaboration with local telecoms operators and Internet service providers, and the launching ceremony was held at GAMTEL’s Serrekunda Exchange premises along Kairaba Avenue, where the Serrekunda Internet Exchange Point (SIXP) is located.

The SIXP was officially launched by the AU Commissioner for Energy and Infrastructure, Dr. Elham Mahmood Ahmed Ibrahim, who was in Banjul to attend the ceremony, also attended by Works minister Bala Garba Jahumpa, who is overseeing MOICI.

Jahumpa in his keynote speech said national bandwidth had increased by more than 300 per cent since the commissioning of the ACE Submarine Cable in December 2012.

However, “it was still critical to establish an exchange point to minimize the burden on unnecessary international bandwidth being utilized by our local traffic, which is expensive”.

The Gambia is the fourth country in Africa supported by the African Union Commission to establish an internet exchange point, and thanked the AUC for the continued support.

Dr Ibrahim in launching the SIXP said AU leaders during their fourteenth ordinary session adopted a declaration to strengthen national programmes, and regional cooperation for the development and interconnection of broadband infrastructures, and deployment of regional government exchange points.

She cited the AU’s Programme of Infrastructure Development in Africa (PIDA) which has in its priority action plan to establish internet exchange points.

“Africa is currently paying overseas carriers to exchange intra-continental traffic on our behalf. This is both costly, as well as an inefficient way of handling inter-country exchange of internet traffic,” she said.

Meanwhile, she announced that plans are underway at the AU Commission to issue a call for proposals to select government exchange points to be supported to grow into regional internet exchanges points.

Sarjo Jallow, Gambia’s ambassador to Ethiopia and permanent representative to the African Union, also attended the ceremony in Banjul, and he reaffirmed Gambia’s full cooperation with the AUC in the development and modernization of the country.

Isatou Jah, chairperson of the national Internet Exchange Point committee said the SIXP was established on 25th July 2013 as a voluntary and non-profit charitable organization, with the goal of providing IP peering facilities for its members.

“For the past two years, the stakeholders in ICT in The Gambia, with support from the African Union Commission, ISOC, WARCIP and other International partners, have been working on establishing an Internet exchange point in the country”, Ms Jah announced.