Vision Development Foundation (VDF) of Modou Turo Darboe, a Gambian business tycoon based in Fajikunda, on Monday distributed meat alongside rice and mayonnaise to hundreds of Muslims in the country.

The donation of the meat, bankrolled by CEO Darboe and his family, was to support the less privileged Muslims in honour of the Night of Power, Lailatul Qadir, observed on the 27th night of the holy month of Ramadan.

The distribution, facilitated by Mama Darboe and Alagie Darboe – children of Modou Turo – was part of the late Turo Darboe’s (father of Modou Turo) initiative of supporting Muslims during the Ramadan.

Lamin Dibba, board chairperson of VDF, said anyone who was able to come to the VDF office had received at least something to go home with to enjoy with his/her family.

He said the foundation will replicate the gesture towards the Koriteh, the feast marking the end of the Ramadan.

Mr Dibba thanked the founder of VDF for his ceaseless benevolence towards humanity.

“He [Modou Turo Darboe] will be rewarded by the Almighty Allah for supporting the vulnerable in the society,” Dibba said, adding that other people who are well-off in society should emulate Darboe.

Mama Darboe, daughter of Modou Turo, who was distributing the meat on behalf of his father, said: “I will continue to talk to my father to do more and more to help humanity, supporting people to improve their livelihood.”

Alagie Darboe, son of Modou Turo, who was also giving some money to the people, said that in future, he would follow his father’s footstep in rendering support to the people. 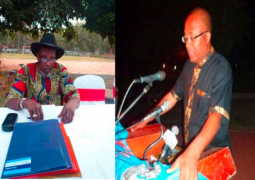