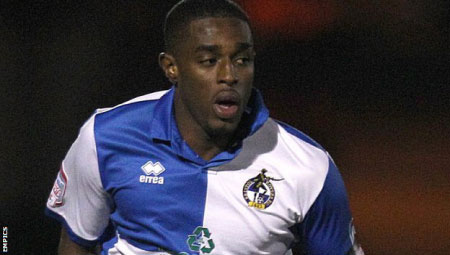 English Championship side (second tier) Middlebrough have completed the transfer of Gambian hopeful and Bristol Rovers winger Mustapha Carayol for an undisclosed fee.

According to the Northern Echo, the 23-year-old Gambian is the seventh summer signing through the doors after a busy close-season for Boro boss Tony Mowbray.

Carayol, who started his professional career at MK Dons, joined Rovers last year, scoring four goals in 30 appearances, and came to the attention of Mowbray at the end of last season. He has signed a three-year deal at the Riverside Stadium.

Carayol passed a medical and will join his new teammates this week ahead of a split-squad double header of friendlies, when Boro will send two separate squads to Carlisle on Friday, and on Saturday.

Mowbray said: “I’m delighted that he’s agreed to sign for us as there was competition for his signature from within the Championship. I see him as young, exciting player who can give us a different dimension and option. I’m looking forward to seeing him perform for us.

“He’s played his entire career so far at a lower level but I see the potential for him to be an exciting addition to our squad and I’m sure he will excite the fans and be a player they can enjoy watching.”

Former Boro skipper Paul Ince spotted Carayol’s potential while he was on the coaching staff at and signed him as a trainee when he took over his first managerial job, at .

Ince recruited him for a second time when he became MK Dons’ manager and handed him his senior debut in August 2007 in a League Cup tie against Sheffield United.