SPECIAL EDITION ON (THE INTERNATIONAL DAY OF AL QUDS)

In commemorating the great event of the international Day of Al Quds, this article will focus on the historical part of this hidden great Mosque in Islam, so that our readers know something about it.

Al-Aqsa Mosque (al-Masjid al-Aqsa, is known as BAYT AL- MUQADDAS, this is the third holiest site in Islam and is located in the Old City of Jerusalem. The site on which the silver domed mosque sits, along with the Dome of the Rock, also referred to as al-Haram ash-Sharif (“the Noble Sanctuary”), is the Temple Mount. The holiest site in Judaism, the place where the Temple stood before being destroyed by the Romans in 70 CE. Muslims believe that Muhammad (PBUH) was transported from the sacred Mosque in Mecca to al-Aqsa during the night journey. Islamic teachings hold that Muhammad (PBUH) led prayers towards this site until the seventeenth month after the emigration, when God directed him to turn towards the Kaaba.

The mosque was originally a small prayer house built by the Rashidun caliph Umar, but was rebuilt and expanded by the Umayyad caliph Abd al-Malek and finished by his son al-Walid in 705 CE. After an earthquake in 746, the mosque was completely destroyed and rebuilt by the Abbasid caliph al-Mansur in 754, and again rebuilt by his successor al-Mahdi in 780. Another earthquake destroyed most of al-Aqsa in 1033, but two years later the Fatimid Caliph Ali az Zahir built another mosque which has stood to the present day. During the periodic renovations undertaken, the various ruling dynasties of the Islamic Caliphate constructed additions to the mosque and its precincts, such as its dome, façade, its minbar, minarets and the interior structure. When the Crusaders captured Jerusalem in 1099, they used the mosque as a palace and the Dome of the Rock as a church, but its function as a mosque was restored after its recapture by Salahudin in 1187. More renovations, repairs and additions were undertaken in the later centuries by the Ayyubids, Mamluks, Ottomans, the Supreme Muslim Council and Jordan. Today, the Old City is under Israeli control.

Masjid al-Asqa translates from Arabic to English as “the farthest mosque”. The name refers to a chapter of the Quran called “The Night Journey” in which it is said that Muhammad (PBUH) traveled from Mecca to “the farthest mosque”, and then up to Heaven on a heavenly creature called al-Buraq. Al-Aqsa Mosque as a whole is confused with a particular building within it, also known as al-Jami’ al-Aqsa or al-Qibli or Masjid al-Jumah or al-Mughata; these names refer to the southern building with the silver lead dome. For centuries, al-Masjid al-Aqsa referred not only to the mosque, but to the entire sacred sanctuary, while al-Jami’ al-Aqsa referred to the specific site of the mosque. This changed during the period of Ottoman rule (c. early 16th century to 1917) when the sanctuary complex came to be known as al-Haram al-Sharif.

The al-Aqsa Mosque is located on the Temple Mount, referred to by Muslims today as the “Haram al-Sharif” (“The Noble Sanctuary”), an enclosure expanded by King Herod the Great beginning in 20 BCE. The mosque resides on an artificial platform that is supported by arches constructed by Herod’s engineers to overcome the difficult topographic conditions resulting from the southward expansion of the enclosure into the Tyropoeon and Kiron valleys. At the time of the Second Temple, the present site of the mosque was occupied by the Royal Stoa, a basilica running the southern wall of the enclosure. The Royal Stoa was destroyed along with the Temple during the sacking of Jerusalem by the Romans in 70 Ce.

It was once thought that Emperor Justinian’s “Nea Ekklesia of the Theotokos”, or the New Church of the God-Bearer, dedicated to the God-bearing Virgin Mary, consecrated in 543 and commonly known as the Nea Church, was situated where al-Aqsa Mosque was later constructed. However, remains identified as those of the Nea Church were uncovered in the south part of the Jewish Quarter in 1973. Analysis of the wooden beams and panels removed from the mosque during renovations in the 1930s shows they are made from Cedar of Lebanon and cypress. Radiocarbon dating indicates a large range ages, some as old as 9th- century BCE, showing that some of the wood had previously been used in older buildings.

In 2012, it was reported that Robert Hamilton, an archaeologist who worked on the Temple Mount after the 1972 Jericho earthquake, had discovered remains under al-Aqsa mosque that he did not publish in his book on the excavations.

These included a mosaic like those used in Byzantines churches, and Jewish mikveh from the Second Temple period.

CONSTRUCTION BY THE UMAYYADS

The mosque along the southern wall of Haram al-Sharif. It is known that the current construction of the al-Aqsa Mosque is dated to the early Umayyad period of rule in Palestine. Architectural historian K. A. C. Creswell, referring to a testimony by Arculf, a Gallic monk, during his pilgrimage to Palestine in 679-82, notes the possibility that the second caliph of the Rashidun Caliphate, Umar ibn al-Khattab, erected a primitive quadrangular building for a capacity of 3,000 worshipers somewhere on the Haram ash-Sharif. However, Arculf visited Palestine during the reign of Mu’awiyah I, and it is possible that Mu’awiyah ordered the construction, not Umar. The latter claim is explicitly supported by the early Muslim scholar al-Muthahhar bin Tahir. According to several Muslim scholars, including Mujir ad-Din, al-Suyuti and al-Muqaddasi, the mosque was reconstructed and expanded by the caliph Abd al-Malik in 690 along with the Dome of the Rock. Guy le strange claims that Abd al-Malik used materials from the destroyed Church of Our Lady to build the mosque and points to possible evidence those substructures on the southeast corners of the mosque are remains of the church.

In planning his magnificent project on the Temple Mount, which in effect would turn the entire complex into the Haram al-sharif (“the Noble Sanctuary”), Abd al-Malik wanted to replace the slipshod structure described by Arculf with a more sheltered structure enclosing the qibla, a necessary element in his grand scheme.

However, the entire Haram al-Sharif was meant to represent a mosque. How much he modified the aspect of the earlier building is unknown, but the length of the new building is indicated by the existence of traces of a bridge leading from the Umayyad palace just south of the western part of the complex. The bridge would have spanned the street running just outside the southern wall of the Haram al-Sharif to give direct access to the mosque. Direct access from palace to mosque was a well-known feature in the Umayyad period, as evidenced at various early sites. Abd al-Malik shifted the central axis of the mosque some 40 meters (130 ft) westward, in accord with his overall plan for the Haram al-Sharif. The earlier axis is represented in the structure by the niche still known as the “mihrab of ‘Umar.”

In placing emphasis on the Dome of the Rock, Abd al-Malik had his architects align his new al-Aqsa Mosque according to the position of the Rock, thus shifting the main north-south axis of the Noble Sanctuary, a line running through the Dome of the Chain and the Mihrab of Umar 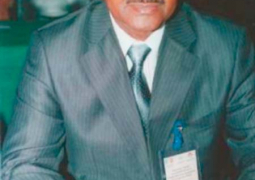 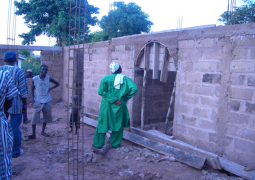