One Ebrima Jallow, a mentally challenged person, was Wednesday brought before Justice Amadi of the Special Criminal Court in Banjul indicted on a single count of murder.

Prison officer Kalipha Bojang told the court “the accused is not well, and is at the remand, he would not sit at one place but would always go around talking to himself.”

“The accused is violent,” he said, adding that they would always use force to take him to court, because he would refuse to go to court.

Officer Bojang said due to the violent nature of the accused, he is kept in a single cell at the remand wing.

Justice Amadi then ordered that the accused to be taken to the Edward Francis Small Teaching Hospital for medical examination.

According to the indictment, the accused, Ebrima Jallow, on 2 December 2014 at Manjai, unlawfully caused the death of one Sulayman Janneh by striking him on the head with a wooden axe, and thereby committed an offence. 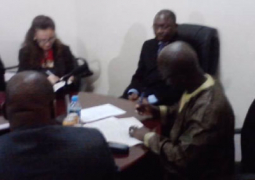