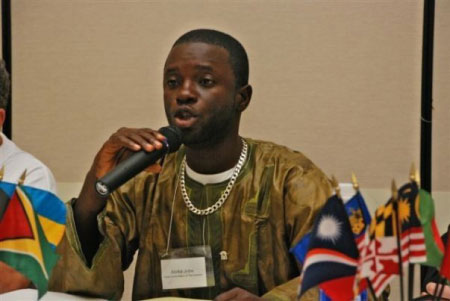 In our June 14th 2012 edition, we introduced to you some inspirational youth leaders and activists among them was one Abdul Jobe.

Well, today, we share with you all what we know about Abdul Jobe and why he could also serve as an aspirator to other young Gambians.

Born in the city of Banjul, Jobe is a conflict analyst, crime prevention specialist and currently serving as the executive director of Youth Crime Watch the Gambia.

He has a background in Law with indebt knowledge and extensive study in conflict management, restorative justice system and peace building processing.

He is very much involved in many international projects through which he learnt firsthand that other cultures also struggle with how best to resolve differences and conflict as a mutually beneficial way.

After much experience in his career as a youth advocate and conflict analyst, he served at the West Africa Youth Network as a volunteer liaison officer to the Economic Community of West African States (ECOWAS) and then worked several years as a peace trainer, conflict analyst, human rights activist, social entrepreneur and social change activist in West Africa.

His has an extensive background on conflict management and peace-building thanks to the training he received from The Network University in The Netherlands, and also attended University of Sierra Leone (Center for Peace and conflict Studies)  where he obtained a certificates in Peace and Conflict Studies .

In 2007, he was awarded the International Casey Award at a ceremony held in Colorado, USA. He has previously won this award in 2004 for his outstanding record on crime prevention among young people in Africa.

He was also awarded the Best Networker during the youth transforming conflict seminar in Sierra Leone for his meaningful contribution towards the UN international decade for the culture of peace and non-violence.

In 2006, Mr Jobe received a special letter from the Gambia Police Force on behalf of the Inspector General of Police for helping to transform the adversarial system of policing to that of community policing by organizing programs between the police and the young people.

As a direct practice from the parent body, the youth crime watch the Gambia; founded in 2003 has remain staunch in promoting this ideals as well as human right issues.

He later became the editor-in-chief of the WAYN Focus, West Africa Youth Network newsletter. He also has an extensive experience in media practices as he in 2000, served as a freelance reporter for one of the most popular newspaper in the Gambia, the Daily Observer.

He later became a senior editor and a columnist (Youth Matters) for the said newspaper. After some spell with them, he worked as a visiting editor-in-chief for the Gambia Info Newspaper formally Gambia Daily.

Abdul Jobe has also worked as the country representative to the International Centre for Conflict and Human Rights Analysis (www.icchra.org) base in Ghana.

In 2011, Abdul Jobe was unanimously appointed to serve as the Regional Director for Youth Crime Watch of West Africa at a coordinators meeting in Ghana.

In 2008 at an international conference in USA, Mr Jobe highlighted the successes of President Jammeh and strongly advocates for the recognition of the president.

After presentations from representative around the world, the Board of Youth Crime Watch America with consultation unanimously agreed to Mr Jobe convincing presentation and awards the International Casey award to President Yahya Jammeh.

As a result of his personal efforts to contribute to the development of the country, the sub-region and the world as a whole Abdul Jobe participated in several international and high profile United Nations meeting both in Africa and beyond.

He remains connected to the international community who continue to invites him to participate in global forums such as the forum for Integrating ICT into an organization- Ghana Institute of Management and Public Administration, World Telecommunication Development Conference- Abuja, International Conference on Economics of Non-violence and vision of a sustainable world- New Delhi, India, 3rd World Spirit Forum, Arosa, Switzerland and the UN International Working Group on the Durban Declaration (concerning racism), Geneva, Switzerland.

Abdul Jobe in his drive to unite youth in Africa expanded the Youth Crime Watch movement in Guinea Bissau and Sierra Leone.

Mr. Jobe is leading the West Africa Youth Network team to promote the participation of young people in the decision making process of local and regional bodies by creating a Youth Unit within the Secretariat of ECOWAS as well as an ECOWAS Youth Parliament.

Mr. Jobe in 2008 headed the team from Gambia and Senegal to produce a youth directorate, a project sponsored by the Open Society Initiatives of West Africa.

Mr. Jobe is a member of the United for Peace and Justice, United Network of Young Peace builder, Netherland, Global Youth Action Network, US.

The quality of his professional accomplishment as demonstrated through his involvement in youth work in several countries in promoting and advocating peace are testimonies to his competency.

His vision is to work to end prejudice, violence and war among mankind, to work for implementation of human right that encompass political, economic, cultural and social right for all people.

To work for the establishment of a culture of peace and a new civilization that is based on respect for life, the environment and each other.

With these and many other complements, its would not be a mistake for us to name him an inspirational youth leader.