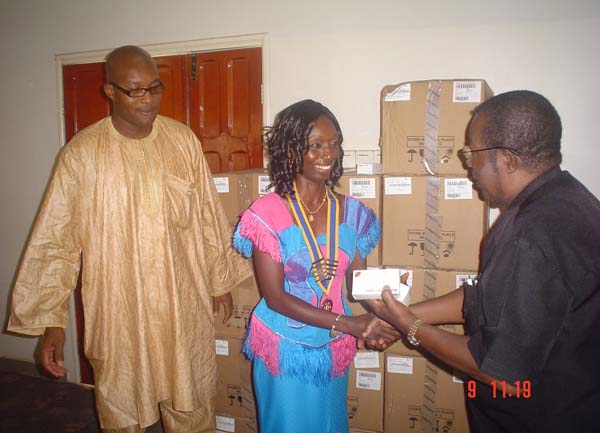 As part of their contributions to complement the efforts of the government of The Gambia, the Rotary Club of Fajara last Friday presented various medical items worth over $30, 000 to the management of the Royal Victoria Teaching Hospital in Banjul, at a presentation held at the hospital's board room.

Addressing the beneficiaries, the President of the Rotary Club of Fajara, Ms Musukebba Ceesay informed the gathering that the presentation was the second in a month for the Rotary club, in collaboration with their partners. He disclosed that three weeks ago they had presented a Cervical Cancer machine worth $20,000 to the RVTH.

She also told the gathering that the donation was made possible through the close collaboration of Rotarians and true friends of the club, The Gambia, and Dr Theo Keller in Switzerland, whom she said, is now based in South Africa.

She revealed that as Rotarians and as a service organisation, they will remain committed to investing in the health sector. Health, Madam Ceesay added, is one of the three priority areas of Rotary International and her club and all Rotarians.

According to her, as partners in development they believe and take pride in improving the lives of Gambians by undertaking various projects.

She commended their partners Mr. Keller and his wife for being supportive in providing assistance on health projects, which said, are beneficial to The Gambia.

In receiving the items, the Chief Medical Director of RVTH, Professor Patrick Ardy applauded the humanitarian gesture of the Rotary Club of Fajara, describing them as true friends of the hospital. She noted that supplementing government efforts in the health sector is a step in the right direction.

Essa Marenah, the Chief Pharmacist at RVTH, said the donation of the medical drugs come at a time when it is badly needed.

The Chief Pharmacist noted that the donated drugs are expensive to procure and are effective in treatment and can also treat or in fact cure accident problems.

He assured the donors that the items would be put to good use.

Muhammed Jagana of the Rotary Club of Fajara also spoke at length about the commitment of his club towards improving the health sector, adding that they have been assisting many clinics and hospitals, among them Bansang.

Mr. Jagana assured the beneficiaries of their continuous support.