Proudly sponsored by the President of the republic, an eight-track album by Mbye Gaye has now hit the shelves of recording studios, Entertainment has learnt.

The multi-flavored eight-track production is entitled Santa Yalla and it's the sixth album to be unleashed by the Banjul-born musician.

In an exclusive chat with Entertainment at his residence in , Mbye Gaye outlined that the album touches on a complex combination of issues, such as contemporary society, asserting that it would also serve as an invaluable source of education, information and entertainment.

He revealed that the album, which will be distributed by the Banjul-based Kerewan Sounds and Serekunda-based Duniya Recordings respectively, will also be in the and CD formats.

Mbye Gaye, in conclusion, could not help but thank the leader for once again sponsoring his album. 'This is the second time that the President had intervened to sponsor my album,' he acknowledged. 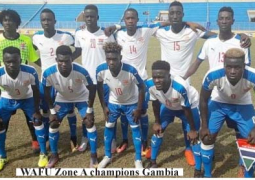 WAFU Zone A U-20 tourney: Gambia in sturdy group