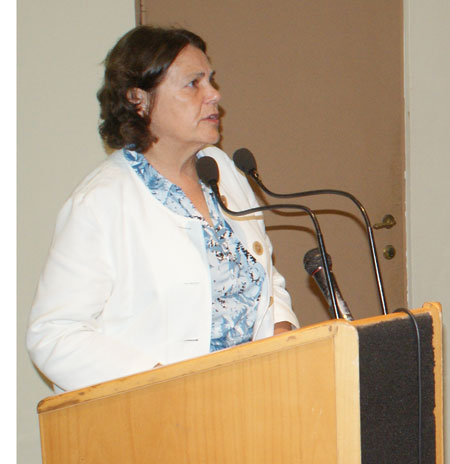 Madam Cynthia Cregg Charge d'Affaires at the US Embassy in Banjul has said that the Gambia has at least three sectors that have a great potential to benefit from the African Growth and Opportunity Act (AGOA).

Madam Cregg, who was speaking yesterday at the opening of the AGOA trade seminar jointly organised by the US Embassy in Banjul and the West Africa Trade Hub underway at the Kairaba Beach Hotel, said these include fisheries, the apparel or garment industry and especially foods.

The seminar on the theme: "The Opportunities and Procedures for Exporting to the United States under AGOA," is seen as part of ongoing efforts of the Embassy and the hub to educate ad motivate the Gambian private sector to access the huge market opportunities that exist in the United States.

During the seminar, participants are expected to discuss the procedures that they need to follow to improve the quality of their products with sufficient value to penetrate US markets. They will also discuss how to network with their business partners in America, as well as highlight some major success stories in the region.

"The Gambia become eligible for AGOA in 2002, and the eligibility has been renewed annually ever since. The Gambia is also eligible for the textile visa - an additional requirement governing the export of textile trade," Ms Gregg told the mostly women participants at the forum.

According to the US diplomat, AGOA was passed by the United States congress in May 2000, as a new approach to the US trade and investment policy towards Africa.

She further stated that AGOA provides sub-Saharan countries the possibility of exporting a wide range of products to America, both duty free and quota free, adding that AGOA covers an expanded list of more than 6,000 products from Africa, including fish and fish products, textile, apparels, handicrafts and footwear.

"You are chosen to participate in this seminar because the US Embassy and West Africa Trade Hub see a real potential in your business making maximum use of the opportunities provided by AGOA. Take advantage of these experts and asks all the questions you have about how to export to the America," she added.

Ms Gregg said the Embassy and West Africa Trade Hub look forward to seeing the 'Made in the Gambia' tag on clothes and 'Produced in the Gambia' labels on food products. This, she added, is the aim of the seminar.

Also addressing the participants was Makhtar Cham, Director of West Africa Hub (Dakar), who said his visit will be practical expecting that this seminar will help to increase exports to the US under the AGOA.

"We will find solutions to your problems, and the challenge is how to penetrate international markets," he told the participants. Cham noted that the Gambia is also making efforts under the AGOA to export to the United States.