In an interview with The Point, the Banjul based Musician described the album as the number one talk in town, noting that the album will available in many formats including CD, and Cassette.

According to him, the launch of the album is scheduled to take place on at the Atlantic Hotel in .

Touching on the sponsorship of his album, Mbye Gaye thanked President Jammeh for sponsoring the album. He described President Jammeh as somebody who always takes the responsibility of promoting The Gambia's musicians. He calls on every Gambian to visit the studios. 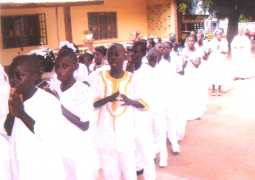