The Mayor of Banjul Samba Faal has been unanimously elected president of The Gambia Association of Local government Authorities (GALA) at the executive meeting of the association held at the Banjul City Council Chambers.

The meeting was attended by mayors, regional governors, council chairpersons, chief executive officers and councilors. Mayor Colley of KMC was elected vice president of the association.

Mayor Faal thanked members for the confidence they showed in him and urged them to be steadfast in their drive to develop the municipalities and councils. He promised to work with all members to make sure that the development objectives of The Gambia achieved at a local level.

For his part, the vice president of the association, Mayor Colley, thanked his colleagues and urged them to work together as a family to bring about development.

The executive secretary gave a report on the activities of the association and urged members to meet their financial obligations to allow the association to carry out its mandate. Other speakers included the Governor of URR, Governor of NBR and Mr. Sheriff Sonko, Director of Governance at the Department of State for Local Government, Lands and Religious Affairs. 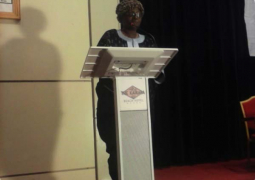