“When all this comes true – and it surely will – then they will know that a prophet has been among them.” (Ezekiel 33:33)

After the fall of our great ancestors Adam and Eve and their ultimate departure from the Garden of Eden, God began raising prophets through whom he communicated for the benefit of his people. In essence, the messages received from him were instructions about what to do or what to expect. Such instances flood the Bible. With the exception of the events in the last days and the return of the Messiah, most of the predictions, warnings and counsels from God through the prophets have been fulfilled. Out of intuition also, prophets spoke and it came to pass. Prophet Amos declared, “Surely the Sovereign Lord does nothing without revealing his plan to his servants the prophets.” (Amos 3:7)

A wife for Isaac

Abraham decided to get Isaac, his son, a wife so he sent one of his veteran servants to Haran, his home town to accomplish that mission. As the servant approached Haran he prayed that the young lady who would give him and his camels water to drink should be the one whom God had chosen. “Behold, I stand by the well of water, and it shall come to pass, that when the virgin come forth to draw water, and I say to her, give me, I pray you, a little water of your pitcher to drink; and she say to me, both drink you, and I will also draw for your camels; let the same be the woman whom the Lord has appointed out for my master’s son.” (Genesis 24:43-44 King James Version KJV) Rebecca, a shepherdess, approached the well to water her flock and Abraham’s servant asked her for a drink. She fetched water not only for him but for the animals as well. Thus she qualified as Isaac’s future wife. And it shall come to pass ... and it came to pass.

God had revealed to Isaac and Rebecca that the older of their two sons will serve the younger. Rebecca and Jacob the younger son schemed to ensure that this revelation happened at all cost. As a result, Jacob is blessed in the place of his elder brother. Having blessed Jacob already, Isaac had little blessings left for Esau. “And by your sword shall you live, and shall serve your brother; and it shall come to pass when you shall have the dominion, that you shall break the yoke from off your neck.” (Genesis 27:40KJV) Jacob became a blessing and later Esau as well, but nothing to equal the younger brother. And it shall come to pass ... and it came to pass.

Chase all the inhabitants away

In their journey through the wilderness to the Promised Land, God had given clear instructions to the Children of Israel when they would take possession of the land not to cohabit with its inhabitants. “But if you will not drive the inhabitants of the land from before you; then it shall come to pass, that those who you let remain of them shall be pricks in your eyes and thorns in your sides, and shall vex (trouble) you in the land wherein you dwell.” (Numbers 33:55KJV) They did not drive them out completely; instead they showed sympathy thus disobeying God’s instructions. They compromised to their detriment and never found peace. The warning was not heeded and they had to pay the price.

The Children of Israel had sinned for having spoken against God and Moses and the Lord had sent fiery serpents which had bitten and killed many. They repented and pleaded for mercy. “And the Lord said to Moses, ‘Make you a fiery serpent, and set it upon a pole: and it shall come to pass, that everyone that is bitten, when he looks upon it, shall live.” (Numbers 21:8) That pole was a foreshadow of the cross; all who look upon the finished work of our Lord and Saviour on the cross in the present day will also be saved.

King Saul was possessed by a demon that tormented him occasionally. As a remedy, the request for a skilled musician was made and a young harpist named David selected. “Let our lord now command your servants, which are before you, to seek a man, who is a cunning player on a harp: and it shall come to pass, when the evil spirit from God is upon you, that he shall play with his hand, and you shall be well.” (1 Samuel 16:16) David chased the demons away with soothing music from his harp.

Prophecy of the crucifixion

“And it shall come to pass in that day, says the Lord, that I will cause the sun to go down at noon, and I will darken the earth in the clear day.” (Amos 8:9) This event was a prophecy of what would happen at Jesus’ death. “It was now about the sixth hour, and darkness came over the whole land until the ninth hour, for the sun stopped shining.” (Luke 23:44)

Prophecies about upcoming events in the Bible are numerous. All of what is contained in the Old Testament which reveals the New Testament has come to pass. We await the prophecies about the last days and the coming of our Lord Jesus to take us home - they most definitely shall come to pass.

Previous:
ECONOMYWATCH: Bankers validate Gambia Bankers Institute Bill
Next:
Ebola outbreak ‘out of all proportion’ and severity cannot be predicated 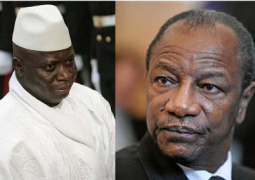 Tourism and The Media Every Wednesday At West Coast Radio