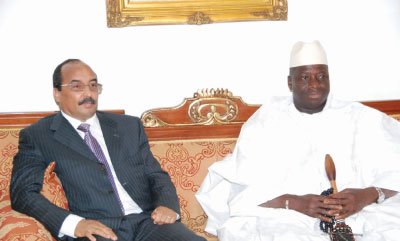 President Ould Abdel Aziz arrived in Banjul Monday evening on a four-day state visit, and met with the Gambian leader shortly after visiting the Gambia Ports Authority in Banjul on Tuesday morning.

“Gambia and Mauritania have excellent relations and we have always been working together. So this visit is a regular visit of consultation that we normally have between The Gambia and Mauritania, and how to further strengthen the excellent relations that exist between the two countries,” Jammeh told waiting journalists after holding a closed-door meeting with his Mauritanian counterpart.

“We are to further strengthen the very excellent relationship between The Gambia and Mauritania. The level of our relationship now has past political relations; there are blood relations,” he said, adding that his Mauritanian counterpart is not a visitor in The Gambia but he is at his second home just like he (Jammeh) when he visits Mauritania.

“There are a lot of Gambians married to Mauritanians and there are also a lot of Mauritanians married to Gambians. So we are a family as opposed to when it is purely a diplomatic visit. He is visiting his second home, and we are looking for ways and means of making the relationship better and deeper,” Jammeh added.

Mohamed Ould Abdel Aziz also told journalists that he is in Banjul for an official visit with his Gambian counterpart to boost the already existing relationship between the two countries.

According to the Mauritanian head of state, he discussed with his Gambian counterpart ways to improve the existing bilateral ties.

“We also discussed about the region as far as the continent is concerned,” he added.

Meanwhile, President Mohamed Ould Abdel Aziz will today visit the Kafuta Agricultural Project in Kombo East, from where he will proceed to Kanilai.