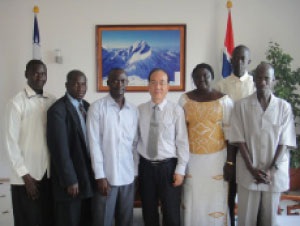 In order to reduce both maternal morbidity & mortality rates in The Gambia, the Embassy of the Republic of China (Taiwan) and Ministry of Health and Social Welfare of The Gambia, on behalf of their respective governments on 27th August 2012 signed an “agreement on the Maternal Health Improvement Program in The Gambia.”

Following the agreement, International Cooperation and Development Fund (Taiwan, ICDF) would fund the programme to improve the maternal health care services in the Upper River Region of The Gambia from September 2012 to December 2015 (3 years).

Following this, the Taiwan’s ICDF-funded Program in URR has collaborated with the Ministry of Health and Social Welfare (MoHSW) to hold several training courses in the past six months, aimed at improving the skills and capacities of the Gambian health personnel, including traditional birth attendants.

Four senior nurses and midwives from WCR and URR would soon receive an advanced training in Fooyin University in Taiwan for two months. And they are expected to share the skills and know-how with local colleagues after their return to The Gambia later this year.

Meanwhile, a four-week training workshop in Basse for 20 community nurses and midwives began on Monday15 April, and the instructors are those specialists who have previously received training from Taiwan. Local participants and beneficiaries appreciated Taiwan’s gesture.

Dr. Adama Demba, the Director of Health Services of MoHSW, said the trained Gambian nurses and midwives would help to improve the quality of local health care services.

More than 60% of NIAs ‘illiterate’

Finding a cure for Kala Azar