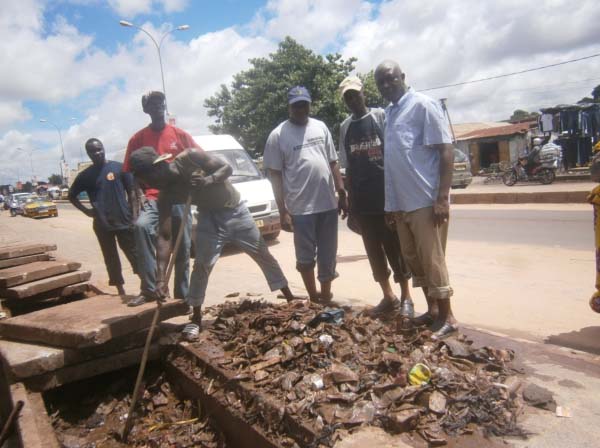 The exercise, which took the whole day, was initiated by the said community, KMC security and vendors at Latrikunda Sabiji.

Speaking at the exercise, Mr Talibo Kongira, ward secretary of Latrikunda Sabiji, who doubles as the general mobiliser for APRC for Latrikunda Ward, expressed delight at “the wonderful initiative.

He said the initiative is essential because the flood of water in gutters in the area “has become a cause for concern, especially that the gutters were all blocked by rubbish, with plastic bags creating a huge chunk of filth in them.

He said the bad odour from the gutters as a result of the filth in them is harmful to the health of people in the area, especially the vendors.

The bad water and filth that settle in the gutters create a breeding place for mosquitoes, which cause malaria and other diseases the life.

He described the exercise as a very successful one in the sense that “the garbage was full of plastic bags, which could have caused disaster to nearby residents, in the market and even the shops”.

“This was why upon noticing this, the community alerted the ward council and the KMC for immediate action to be taken to clear all the rubbish inside the gutters,” he said.

He therefore called on others to emulate them and clean their environment and surroundings.

“The importance attached to the exercise cannot be overemphasized as environmental hygiene and cleanliness is key to our lives,” he said, adding that cleaning the environment is “one way of having your freedom”, in the sense that people could be free from malaria and other diseases to a large extent.

He called on the National Roads Authority (NRA), the NEA and the Government to help them with necessary materials and tools to lift out concrete cement slaps to be able to remove the garbage inside the gutters.

He also seized the opportunity to thank the Gambian leader who and his government called for the ban on plastic bag use in the country.

“We have seen the dangers of plastic bags; that as soon as the ban was implemented, the streets and other places in towns and communities have started getting cleaner by the day,” he noted.

He therefore commended the Gambian leader for his “brilliant ideas”.

For his part, the ward councilor of Latrikunda Sabiji commended all those who initiated the idea as well as those who participated in the exercise.

He challenged both the vendors, the youth, KMC Police and the entire community to continue the good work.