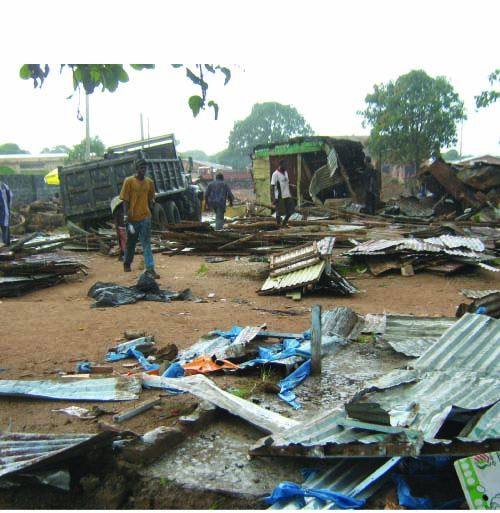 Wednesday was a busy day for drivers, shopkeepers, food sellers, contractors, among others, within the Tipper Garage in Bakoteh as workers from the Kanifing Municipal Council demolished all structures erected within the area.

The demolition exercise, which saw the destruction of almost all buildings such as shops and canteens within the area, was done amid tight security.

This reporter, who visited the scene to ascertain the reality on the ground, spoke to some of the affected individuals.

Jarga Faal, President of Gambia National Transport Association Tipper Garage Branch, revealed that they received a notice for eviction on Friday 8th October informing them to vacate the place by the 15th October.

According to him, when he enquired from one Modou Ndow of the Kanifing Municipal Council, he was told that they had now been relocated just opposite the Ghaddafi Mosque around West Coast Radio. "This place," he added, "is being cultivated and harvest is yet to take place". He stated that, to their surprise, they were again asked to move to the Bakoteh dump site, which he added, 'is not convenient" for them.

"Is not that we don't want to leave the garage, but because we don't have any place to go and the Bakoteh dump site allocated to us is not a suitable place. That is why we cannot move from the garage," he said, calling on government to intervene to remedy the situation.

He revealed that Tipper Garage is the source of livelihood for over two thousand people ranging from drivers, to food sellers, donkey carts, contractors, shop keepers, labourers and masons, among others, all of whom earn their living from the garage.

"We first started at Westfield, then to Serrekunda opposite the police station, later to Bambo, and now Bakoteh since 1989," he said.

For his part, Edrissa Jallow a truck driver, called on the KMC to provide them with a suitable place with toilet facilities, water and even shops for shopkeepers noting that he had been earning his living at the garage for the past 15 years as a driver. Jallow also expressed dismay over the action taken by the council.

He argued that the KMC should have provided them a new place with toilet and water facilities before issuing the eviction notice.

One Mrs Isatou Jallow, a food seller, also lamented the adverse effects of the eviction, noting that she had no suitable canteen at the place, and used to sit under a tree there to sell, pointing out that "this is the only way I earn a living for my family".

Omar Sowe, a mason who also spoke to our reporter, solicited government?s intervention because, as he put it, survival as at now is going to be very difficult for them, since their business premises have been demolished.

When contacted, Pa Kalifa Sanyang, Public Relations Officer at the Kanifing Municipal Council dismissed such comments, declaring that the Council had issued them a notice to vacate the place three years ago.

He announced that the KMC is now going to hand over the place to the ministry of Fisheries and Water Resources for the construction of the fish market project.

Commenting on the proposed site for the new garage, Sanyang said the council reached an agreement with the person who cultivated crops at the site, and that once the crops are harvested, the place shall be free for them to move into.

He was, however, quick to state that he could not guarantee that the council will provide the site with water, toilets or other facilities.