I am writing this from Marlborough’s link community of Gunjur in The Gambia to which I have travelled to share with Gambian friends the return to democracy, peace and harmony after the election on December 1 of President Barrow.

Adama Barrow was elected as leader of a coalition of opposition parties but then entered a very difficult period of six weeks during which the defeated past President Yayha Jammeh refused to accept defeat until finally forced to leave the country on January 20 following the armed intervention by troops from Senegal representing the Economic Community of West African States (ECOWAS). This was not before Jammeh had called a state of emergency, resulting in many people fleeing the country fearing conflict and violence, and the rapid evacuation of thousands of tourists, well covered in the international, national and local media.

The violence thankfully never happened, the troops ‘walked into’ The Gambia in the presence of 3 Heads of State from surrounding countries and Jammeh was persuaded to leave State House but not before he had ‘lined his pockets’ with millions of dollars as he had been doing throughout his Presidency, apparently amassing many of these dollars in Panama, leaving the country destitute, according to all I spoke to.

He is now in Equatorial Guinea as a ‘guest’ of the equally notorious dictator who leads that country. Friends tell me that Jammeh will almost certainly face the International Criminal Court once sufficient evidence of his many human rights abuses has been gained.

All the signs in The Gambia from the many people I have spoken to are of relief, peace, joy, true happiness as expressed in all conversations, and a desire to move forward and forget the past.

The return to freedom of speech and the ability to talk freely to anyone, expressing views which might be controversial but in the knowledge that one is not going to be reported to the National Intelligence Agency is fundamental to everyone’s emotions. One becomes aware that the breakdown of trust between individuals, permeated every aspect of life under the Jammeh regime and this is now rapidly dissolving.

President Barrow is clearly gathering around him a team of Ministers with the right background, experience and qualifications who arealready guiding him. They include his Chief Justice Hassan Jallow who lived in Rwanda during the  22 years of the Jammeh regime, while working for the International Criminal Court having been a senior member of the Government of Sir Dawda Jawara which was overthrown in 1994 in a military coup by the army led by the then 27 year old Captain Yayha Jammeh.

Also among the Ministerial team is Dr Isatou Touray who spoke at the 2015 Marlborough Brandt Group AGM in Marlborough Town Hall, on the problem of female genital mutilation, as Director of Gamcotrap, the NGO particularly leading the fight against FGM and who is now the Minister of Trade and Industry. Isatou it was who took a leading role in getting the opposition parties to unite in the form of a coalition, recognising that it was only if they were united in opposition to Yayha Jammeh they had a chance of ousting him.

The UK Foreign Secretary Boris Johnson was on my flight to Banjul on 14 February and at a meeting I had the following morning with the British Ambassador, Colin Crokin who had accompanied him to a meeting with President Barrow the previous evening, he told me that the Foreign Secretary had expressed the desire of the UK Government to work closely with The Gambia not least in ensuring that The Gambia is welcomed back into the Commonwealth at the earliest opportunity. The Gambia was withdrawn by President Jammeh on a whim some four years ago, probably having taken the decision to ‘jump before he was pushed’ at the forthcoming Commonwealth Heads of Government Meeting, on account of his appalling human rights record but in resigning, accusing the Commonwealth of being a “colonial organisation”.

While The Gambia is not currently receiving bilateral aid from the UK’s Department for International Development, aid is coming from the UK Government through the EU which has promised 65 million euros, and via other organisations that are supporting development in The Gambia. The Foreign Secretary singled out education and tourism as a particular focus for the UK working with the Gambian Government.

In discussions with friends and colleagues on the impact that the change of regime is likely to have on the flow of migrants taking ‘the back way’ from The Gambia to Europe it seemed likely that this would be small, indeed I was told of young men who had left since the appointment of President Barrow, seeing no future for themselves here. This is something that the Marlborough Brandt Group is addressing by providing loans for young entrepreneurs in Gunjur to set up businesses - a highly successful programme which is creating wealth and employment and which needs to be rolled out across the country to give young people hope for the future.

At a reception for the new President in the gardens of the Senegambia Hotel attended by representatives of the Diplomatic Corps and friends and supporters he came across as a quietly humble man with great charm and a good sense of humour, hardly believing the great role that had been thrust upon him.

The following day 19 February his inauguration took place and the celebration of 52 years of Independence from the British colonial days, at a nine hour gathering in the National stadium attended by 20 Heads of State representatives of the armed forces from The Gambia and Senegal who gave an impressive display of armed drill and marching in harmony in front of a crowd of 25,000 adoring and wildly enthusiastic subjects. One could not but feel what a privilege it was to be present at this extraordinary turning point in The Gambia’s history.

It was clear from the atmosphere in the stadium that there was an overwhelming feeling of relief and optimism and universal support for President Adama Barrow. In complete contrast to public occasions I have attended in the past where President Jammeh was surrounded by vehicles, bristling with armed troops, rifles at the ready, here there was a singular lack of security.

At the inauguration a particular welcome was afforded to the President of Senegal for the vital role that he and his Government had played in hosting Adama Barrow during the state of emergency when Yayha Jammeh was refusing to accept the result of the election. In addition when ECOWAS troops crossed into The Gambia to force Jammeh out in a bloodless intervention, they were led by the Senegalese army.

In an interview with the President of Liberia she made the point that what had happened in The Gambia where the democratic process had overthrown a dictator with support from other African countries and in particular from within The Gambia itself, this was a fine example of Africa being able to sort out its own problems peacefully, and should be an example to other dubious regimes in the continent.

Today 21 February, two days after his inauguration, I had the privilege of a private meeting with President Barrow in the company of three Gambian friends from Gunjur, Madi Jatta, MankamangTouray and Nabani Darboe all of whom had received training in Marlborough in early childhood education and storekeeping in the late 1980s and early 1990s and now hold senior positions in the Ministry of Education and the National Water and Electricity Company (NAWEC).

The President was aware of the 34 year relationship between Marlborough and Gunjur. We were able to describe the impact that it had had on the two communities not least on those young people from Marlborough who had lived and worked in Gunjur and I was able to cite the example of Miranda Armstrong from whom I had received an e mail that morning and who had taught English to students in the Gunjur Upper Basic School in her gap year in 1989 and who has subsequently worked for NGOs in  Sri Lanka, Burundi, Benin and Senegal and is currently UNICEF representative in Côte d’Ivoire. Likewise Mankamang Touray talked about the many young Gambians who had received training under the auspices of MBG.

The President was full of praise for what had been achieved and expressed his determination that his government should support the relationship in whatever way possible.

Likewise, we offered to do all we could to support the development efforts of his Government in whatever way possible and also advocate on his country’s behalf for the rapid re entry of The Gambia into the Commonwealth, through contacts in the Commonwealth Secretariat.

I was able to present the President with letters of congratulation and good wishes from Marlborough’s MP Claire Perry who had spent a week in Gunjur in 2013 and from the Mayor of Marlborough, Councillor Noël Barrett-Morton, with a present from the latter in the form of a very fine paper weight containing the Marlborough crest.

I return to Marlborough with a great sense of optimism on behalf of our many friends in Gunjur and more widely in The Gambia and the hope that the international community will recognise the new regime and give it all the support that it deserves after 22 years of cruel dictatorship. 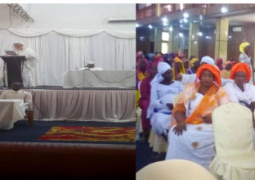