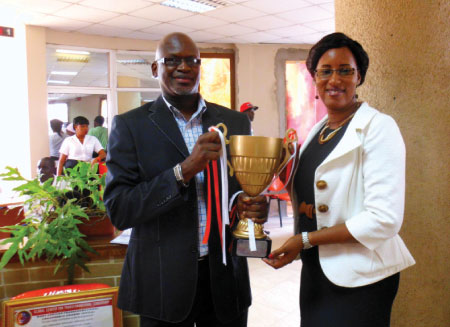 This development came after their 2012 final league competition battle last week against Daru Salam FC winning them by 1-0.

The ceremony was held at the Africell headquarters on Kairaba Avenue.

Speaking on the occasion, Aminata Jallow, owner and manager of the team, congratulated the team for their victory, saying they were able to emerge victorious due to their commitment, dedication, and togetherness as one family.

She, however, said this was a small thing they had done but would do much better in future.

Africell Marketing Manager Papa Leigh said the tournament sponsored by another GSM operator and won by Africell, was a great achievement by the team.

He congratulated the team and tasked them to do much better in future as they will always be supported by Africell.

In the same development, an NGO from Global Centre for Transformable Leadership also awarded Africell for being The Gambia’s leading GSM service provider for its relentless innovation in transforming the GSM landscape in the country.

This award was consecutively presented to Africell as the team’s victory trophy presentation was held.

Speaking on behalf of the chairman of Global Centre for Transformable Leadership based in Ghana, Dr Joe Mensah expressed his appreciation to the company and commended Africell for their wide coverage.

Dr Mensah extended his appreciation to the Head of State of The Gambia pointing out that when it comes to peace, “The Gambia is on the map”.

He went on to encourage the management and staff of Africell to keep up the good work and push further for the betterment of the institution.