GPU Prexy: We must scrutinize how our budget is spent 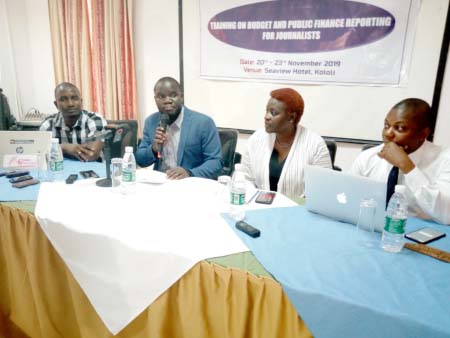 Sheriff Bojang Jr, the president of The Gambia Press Union (GPU) says there is no better way of holding authorities to account than to monitor and scrutinize the way they spend the country’s money and how they get it, where it is spent.”

The GPU President was speaking recently at the opening of four day training for 30 journalists on Budget and Public Finance Reporting. The training, organised by the GPU with funding from the International Republican Institute (IRI) brought together journalists from the print and online media as well as those from the radio and television.

The topics for the training, Sheriff Bojang Jnr added, were crucial to the lives and livelihoods of all and sundry, especially to the democratization process in the country.

“We have not done the best jobs to ourselves and to our audience. We are the eyes and the mouths of the people of our country. They depend on what we report and what we tell them,” he said.

Bojang said everything people do in the country is linked to the budget and public financing. He added: “The training therefore would hopefully broaden the participants’ horizon of reporting public financing and budget. This is what is going to consolidate our democratic gains,” he stressed.

He said beyond that speech, The Gambia is open for business, citing the coming of multi-nationals into the country for investment.

Richard Annerquaye Abbey, trainer from Ghana, said after the budget has been presented at the National Assembly by the minister of Finance; it is the job of journalists to further explain it for the ordinary people to understand.

Mr. Abbey, who is also a senior business journalist for Citi TV, said: “There are so many things that the journalists can take and develop them into stories. Therefore, journalists should use the budget as a guiding tool to hold the government to account.”

Abbey added: “Once we are questioning the policymakers, you are questioning the technocrats; we are able to get answers… I think in reporting the budget, is not our duty to report on behalf of government. The government has done its budget, left to them alone everything should be buried. Because if you don’t talk about it, they are going to spend the monies anyway,” he said.

Robina Namusisi, country director of IRI, said the budget is very important, arguing that it is like ‘blood that flows in a human being’.

“The budget is really important. If Gambia was a human being then the budget would the blood.”

She added: “The budget must flow and in the right quantities to all the different parts of this country to uncover activities, thus there’s need for the media and civil society activities to critically scrutinize the budget.”