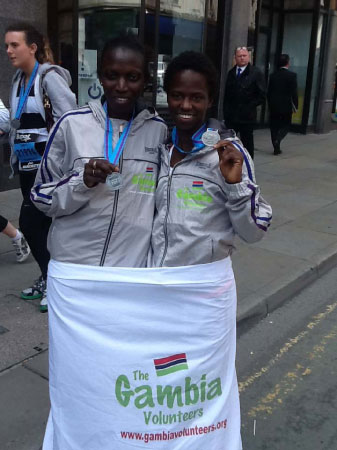 The Gambia Volunteers Organisation, the organisers of Bajana Marathon in Foni Berefet district, has taken The Gambia marathon runners to international level.

However, the overall female winner of the Bupa Great Manchester run came from the Elite female Runners of 10 whom the race organisers selected to run before Mariama T. Jallow’s orange band.

The Gambia can now celebrate the success of Mariama T. Jallow as the female winner of the orange band at the Bupa Great Manchester run 2013. Hoja Secka also performed brilliantly as she recorded 44.25.

Our proud Gambian athlete can be seen running in the lead group and she is among the top female finishers.

Both Samba Bah and Alhagie Bah ran in Bajana Marathon and won medals and because of their participation in the Bajana Marathon, The Gambia Volunteers selected them to represent The Gambia in the Sierra Leone Marathon.

This is a big success for Gambian long distance runners and the whole nation should rally behind them on their return to The Gambia to support and encourage them.

I call on the ministries of Youth and Sports and of Culture, NGOs, banks, businesses and the general public to recognise the talent that these athletes have and to sponsor them in any way they can. These athletes need sponsorship in order to keep our nation proud in international competitions.

I would like to thank our sponsors and partners, Gambia Bird Airlines, The Gambia Armed Forces, Gambia Tourism Board, Gambia Ports Authority, Gambia Police Force, Brikama Area Council and British High Commission for their continuous support and collaboration.

Gamtel coach: I am not afraid of any team in the league