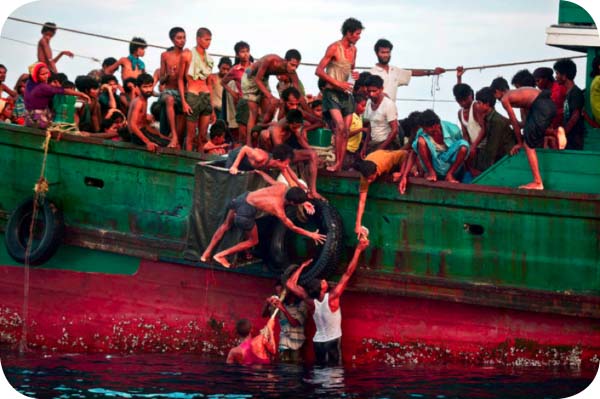 The Gambia government has offered to resettle the Royingya people of Myanmar, a sovereign state in Southeast Asia bordered by Bangladesh, India, China, Laos and Thailand.

Running away from persecution in Myanmar, thousands of the Royingya people have taken to the sea in recent weeks with no country willing to take them in.

In a press release aired by the state TV last night, the Gambia government has offered to resettle the Royingya people, also known as boat people, in The Gambia.

The release states: “The Government of The Gambia notes with great concern the inhumane condition of the Royingya people of Myanmar, especially those referred to as boat people currently drifting in the seas off the coast of Malaysia and Indonesia.

“As human beings, more so fellow Muslims, it is a sacred duty to help alleviate the untold hardship and sufferings these fellow human beings are confronted with.

“Therefore, The Gambia being a country with predominantly Muslim population and with a natural culture of interfaith tolerance hereby expresses willingness to accept and resettle all boat people who wish to reside in The Gambia.

“In this regard we are appealing to all countries with a conscience to assist in bringing the Royingya people to The Gambia for resettlement.

“The Government of The Gambia further requests the international community to contribute towards the humanitarian gesture in the form of tents, beddings, household material, medicinal and other forms of requisite logistical support, to set up habitable camps with decent sanitary conditions for the Royingyas.”

According to the United Nations there are about 800,000 Rohingya in Myanmar that are considered to be among the most persecuted people in the world. Deadly strife between Buddhists and Muslims in Rohingya has displaced over 90,000 people. Tens of thousands of families were made homeless when their dwellings were burned to the ground.

Myanmar does not recognize the Rohingya as one of its ethnic groups and many in the country consider them to be illegal immigrants from Bangladesh.

Amnesty International recently said the Rohingya are increasingly being hit with targeted attacks that have included killings, rape and physical abuse.

Life for Relief and Development is working to send emergency food such as rice, flour, lentils, beans, tomato paste, sugar, tea and relief items which include tents, clothing, blankets, hygiene kits, mosquito nets and kitchen utensils to the displaced people in Myanmar.

In the Andaman Sea off Thailand

A wooden fishing boat carrying several hundred desperate migrants from Myanmar was spotted adrift in the Andaman Sea between Thailand and Malaysia on Thursday, part of an exodus in which thousands of people have taken to the sea in recent weeks with no country willing to take them in.

Cries of “Please help us! I have no water!” rose from the boat as a vessel carrying journalists approached. “Please give me water!”

The green and red fishing boat, packed with men, women and children squatting on the deck with only plastic tarps to protect them from the sun, had been turned away by the Malaysian authorities on Wednesday, passengers said.

They said that they had been on the boat for three months and that the boat’s captain and crew abandoned them six days ago. Ten passengers died during the voyage, and their bodies were thrown overboard, the passengers said.

“I am very hungry,” said a 15-year-old boy, Mohamed Siraj, who said he was from western Myanmar. “Quickly help us please.”