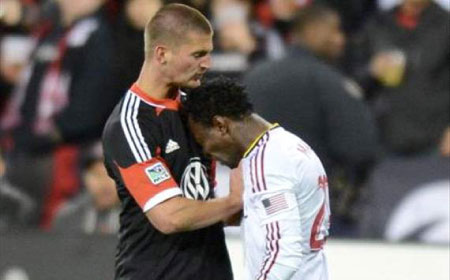 The MLS Disciplinary Committee has suspended Gambia’s midfielder and Real Salt Lake footballer for one match for delivering a headbutt to D.C. United’s Perry Kitchen.

Mansally is set to miss his club’s next competitive game against the Colorado Rapids, after being suspended last Thursday.

It seemed like a matter of time until the MLS Disciplinary Committee weighed in and filed a ruling last Thursday, goal.com has stated.

Real Salt Lake’s Abdoulie Mansally was said to have delivered a Zinedine Zidane-like headbutt to D.C. United midfielder Perry Kitchen after a scuffle during a league match.

The league announced that Mansally was suspended for one game and fined an undisclosed amount for the headbutt that came during the 61st minute of RSL’s 1-0 loss at RFK Stadium, and he will miss RSL’s rivalry bout against the Colorado Rapids on Saturday night.

The Disciplinary Committee also fined Mansally’s teammate Alvaro Saborio an undisclosed amount for his showing of “aggravated dissent” during second-half stoppage time of the same match.

Real Salt Lake got a late 1-1 draw over the Vancouver Whitecaps over the weekend.

Saturday’s game ended dramatically for Real Salt Lake after having thought they secured an early win but a late twist from Vancouver sent the game to a deadlock.

Sainey Nyassi’s New England played a stalemate game but this time both sides failed to find the net.

The two teams came into the game with the two worst offensive records in MLS.

New England had scored just one goal, and Seattle two, goal.com has stated.

The Sounders are the only team in MLS without a win.