The Special Criminal Court on Monday sentenced one Faye Colley to death by hanging, after he was convicted on a charge of murder.

The presiding judge in his judgment stated that the convicted person, Faye Colley, was charged with murder and the particulars of the offence stated that on 15th December 2009, he caused the death of one Kajally Sanneh by beating him with an iron bar on his penis at Sinchu Sore.

He added that the prosecution called ten witnesses and tendered several exhibits, and that the convicted person in his voluntary statement stated that he went to the house of the deceased with the intention of killing him, because he was in love with his wife.

He said the death of the deceased was caused by the accused person, stating that the court was convinced that Faye Colley assaulted Kajally Sanneh with the intention of killing him.

He said the court found that the prosecution has proven its case beyond all reasonable doubts by linking the accused with the offence charged.

“I therefore sentence the convict to death by hanging him,” the judge declared. 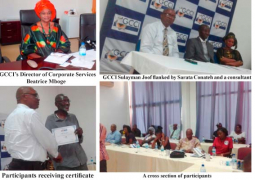 What are the preventive measures to adopt when a dog bites a person?