A man believed to be a Guinean national was last Saturday arrested in Latirkunda German, suspected of raping a 17-year old girl (name withheld).

Abdourahman Jallow is alleged to have persuaded the under-aged girl to accompany him to his friend's house in Latirkunda German. On reaching there, he reportedly sent the friend to buy him something and, when thus left alone with the victim, he forced himself on her.

The undesirable phenomenon of rape has in recent times become a menace, with uncomfortably too many incidents being reported time and again.

Recently, in an interview with GRTS, President Jammeh vowed to set example on murderers and rapists. "We will not tolerate crime of whatever nature, more so violent crimes," he stressed. 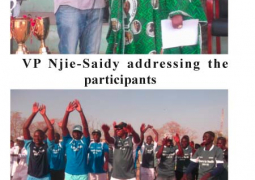