Justice Joseph Emmanuel Ikpala of the Special Criminal Court of the High Court in Banjul yesterday convicted and sentenced Amadou Jarra, a Malian national, to death.

The court found Jarra guilty for the murder of Kitty Fatty and Nyimasata Ceesay, co-wives, in March 2008 at Kerewan in the North Bank Region.

Jarra was charged with two counts of murder, and had pleaded not guilty.

The court noted that the prosecution was able to prove its case beyond all reasonable doubt.

Delivering his judgment, Justice J.E. Ikpala stated that the prosecution, in order to prove its case had called in nine witnesses and tendered eight exhibits, whilst the convict gave evidence in his own defence and called no witness.

Justice Ikpala stated that, "in his view the issue for determination in this case could be subsumed in three: firstly, was the offence of murder proven against the accused? Secondly, is the convict's confessional statement valid? Thirdly, does the defence of provocation avail the accused?"

Justice IKpala cited Section 187 of the Criminal Code Cap 10 Laws of The Gambia, which, he said, creates the offence of murder. Thus, any person who out of malice aforethought causes the death of another person by unlawful acts or omission is guilty of murder.

He ruled further that there was knowledge that an act or omission would probably cause death or grievous harm.

"I finally hold that the prosecution has proven its case beyond reasonable doubt, and I found the accused guilty as charged," Justice Ikpala announced.

He also told the court that the nature and circumstance of the case does not, and has not left the court with any discretion, noting that the court can only pronounce a sentence of death on the accused person.

He then looked at the convict and said: "You are sentenced to death, and may God have mercy on you and your soul."

Ecobank stands out at bank of the year awards 2009 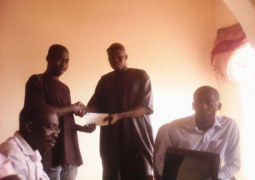