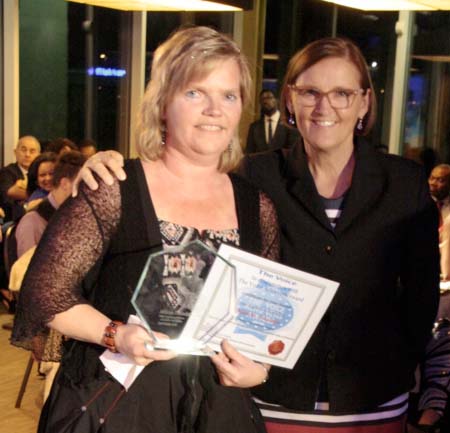 A charitable organisation registered in The Gambia and Holland, 4Gambia Foundation, is embarking on initiatives and implementing projects to make life better for Gambians.

Since formation in 2012, the foundation has been involved with different projects in The Gambia such as education, health and sports as well as giving support on other areas to needy families.

The foundation’s positive live transformation strives was recently recognised by the Voice Achievers Award,  a project of The Voice magazine in The Netherlands to recognise Africans and friends of Africa for their outstanding achievements on yearly basis.

At its annual award night held in The Netherlands in October this year, 4Gambia Foundation was awarded in recognition of its “outstanding achievements”.

Geke Lagerburg-Schutte, the Dutch founder of 4Gambia, said the award is no way going to make them complacent because at the start of the foundation, they were not thinking of any award.  They were doing what they are doing for the sake of helping Gambians.

If anything, she said, the award is a motivation to continue to do more and that is what they would do.

In the area of education, the foundation is currently sponsoring 50 students across the board, from nursery to senior secondary school.

As government schools are tuition-free, the Dutch woman said their sponsorship takes care of books, both exercise and text books, school bags, uniforms, transport fare, and other academic need up to certain amount.

Mrs Lagerburg-Schutte said their sponsorship, for now, stops at grade 12 but they are looking at the possibility to continue supporting the students at tertiary level and also supporting those at skills centres.

At Kerr Ngoyan, the Dutch woman said the foundation is currently fencing the premises of the school and had initially supported the roofing of the main classroom block.  They have also changed the dilapidated windows and doors of the classroom to new ones.

She said plans are also underway to help the school with a library and kitchen, as requested by the school administration.

At Batokunku, the first project of the foundation, they refurbished the nursery school after it was in a terrible state.

The foundation roofed the only classroom block of the school.  Later on, they fenced the premises and also bough benches for the classrooms.

They had installed playgrounds at the school in collaboration with another foundation, Gambia Speelt Mee, and also periodically buy uniform for the needy students.

The Ministry of Basic and Secondary Education has been impressed with the operation of the nursery school and granted it permission to be expanded to a primary school.  The foundation built two temporary classrooms to serve as primary school while the community identifies a permanent site for the expansion.

Amadou Demba, 4Gambia Foundation national coordinator, said in the area of sports, they have support more than 25 footballs clubs and academies with materials such as jerseys, footballs, football boots, trophies, etc.

“We hoping to do more because we have a long waiting listing of teams requesting for support,” he said.

On the side of health, he said the foundation is currently supporting a midwife in Brufut by giving her medicines and medical equipment.

They have also visited Sittanunku village in Upper Nuimi District where the village clinic is dilapidated and the village is looking for support to have it running.

Mr Demba said though they do not promised the village, they will look into the possibility of supporting.

Meanwhile, 4Gambia Foundation recently had a meeting at the President International Award in Bakau with their sponsored children together with the parents and guardians of the children.

The meeting provided the platform to interface with the parents and guardians of the students to discuss the importance of education.

One of the sponsored students, who recently completed grade 12 at Mindaw Junior and Secondary School, Basirou Ceesay, hailed the foundation for supporting his education.

“Thanks to your sponsorship, I did not lack any school material; I have never been sent home for lack of books or any academic material needed at my school,” he said.  “Your sponsorship made it possible for me to attended extra classes so as to double up in my areas of weakness.  I cannot thank you enough for your support.”