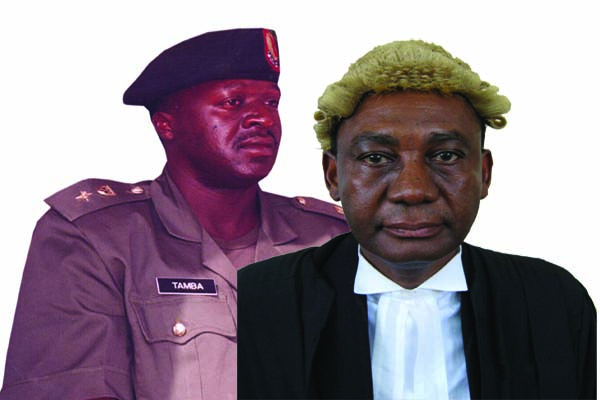 Ex Lt. General Lang Tombong Tamba, who is standing trial along with seven others, for treason has denied being involved in the 2006 foiled coup attempt.

Testifying under cross-examination, he told the crowded court that it was news to him that he was part of that coup.

Tamba was responding to a question posed by the Director of Public Prosecution, Richard N. Chenge, who asked whether he would be surprised to hear that Bunja Darboe had made a statement that he (Lang Tombong) was part of the 2006 foiled coup attempt.

"My lord, I am surprised to hear of my involvement in the 2006 foiled coup plot. Bunja Darboe is the greatest liar on this earth. How would I be part of a coup, and again led the loyal officers and soldiers to foil that particular coup?"

Tamba, the former Chief of Defence Staff of the Gambia Armed Forces was speaking yesterday under cross-examination by DPP Chenge.

Below is the cross-examination in Question & Answer format

DPP: You know one Bunja Darboe, who is now in prison in connection with the 2006 abortive coup?

Lang: Yes, I know one Bunja Darboe. He is currently serving sentence at the Mile 2 Central Prison, following his involvement in the foiled coup of 2006, which I with other officers and soldiers of GAF had foiled. Bunja Darboe was last Friday taken from Mile 2 to the Director of Public Prosecutions' office.

DPP: Bunja Darboe was the military assistant to the then CDS Ndure Cham?

Lang: That is news to me. I was not part of that coup.

DPP: You are the one who made Bunja Darboe to write that speech?

Lang: That is a lie. I was not party to the coup, and I never forced Bunja Darboe to write the speech.

DPP: You promised that if he did not mention your name, you will make sure he did not stay long at Mile 2?

Lang: That is a lie. I myself, being presently detained at Mile 2 Central Prison, I realised that it is not a favourable condition for me, or any other person to live in. Therefore, my lord, some will even cut a throat to get out of that condition. That was why Bunja Darboe was called to the DPP's office to lie, so that he gets out of prison.

Lang: That is a lie. About six of those sentenced in 2006, were taken to the NIA headquarters so that they lie against me, implicate me in 2006 foiled coup so that they can be pardoned, and I leave that to the Almighty.

DPP: You did nothing to help them as you promised; you abandoned them?

Lang: That is a lie. It's mere imagination and a fabrication.

DPP: You are aware that because you failed to help them, as you promised, that is why they are making statements against you, about your involvement in the 2006 foiled coup?

Lang: I am not aware. I do know that they are prepared to fabricate lies against me in order to get out of prison. Because, anytime they return from the NIA to the prison, they do tell us that they would soon go home, as they are ready to lie.

DPP: You are, therefore, not surprised that I have a statement made by Bunja Darboe that you are part of the 2006 foiled coup?

Lang: My lord, I am surprised to hear of my involvement in the 2006 foiled coup. Bunja Darboe is the greatest liar on this earth. How would I be part of a coup and again led the loyal officers and soldiers to foil that particular coup?

DPP: On that particular day of the coup, you followed Ndure Cham to his house at Brufut with some PIU officers?

Lang: My lord, that is a lie. I went to Ndure Cham's house with some soldiers with the intention to have him arrested, and by the time we reached the house he had already fled. The PIU were not under my command. That is mere imagination.

DPP: Before you entered Ndure Cham's house, you asked some people about the whereabouts of Ndure Cham and you were told that he was inside, and you pursued him in there.

Lang: Because we did not know the exact location of Ndure Cham's house in Brufut, we were led to his house by a police officer. On that very day, we found his car outside the compound, and we contacted the police officer who told me that "it was couple of hours ago that Ndure Cham past here."

DPP: You made a statement at the NIA with respect to 2006 foiled coup?

DPP: In that statement you made, you said the 8th accused gave you D5, 000 as you were about to stop the 2006 coup, but you did not tell the 8th accused the purpose why you wanted the money.

Lang: Yes, my lord. I did not tell the 8th accused why I needed the D5, 000. I did mention the same in my statement, that the money was put to fuel my car for the operation of foiling the coup as I did not have money at that time to fuel my car.

DPP: You agree that the 8th accused is a good friend to you, and can finance you at anytime of need?

Lang: Yes, my lord. The 8th accused is my friend, but it is not true that he can finance me at anytime of need.

DPP: You want this court to believe that you did not see Ndure Cham himself?

DPP: Before you got to Ndure Cham's house, did you receive any information that Ndure Cham was seen leaving the house.

DPP: According to you, you have seen the car packed outside his house. I am putting it to you that you met Ndure Cham at his house.

Lang: That is a lie. I did not meet Ndure Cham at his house.

DPP: I am putting it to you that you allowed Ndure Cham to escape, because if he was arrested he will mention your name.

Lang: That is a lie. I did not go there alone to arrest Ndure Cham.

DPP: Why, as the CDS, Ndure Cham did not declare himself President when the President was out of the country at that time?

At this juncture, defence counsel for General Tamba, SM Tambedou, objected on the grounds that the witness before the court is not Ndure Cham and, therefore, he could not answer that question and could not form his opinion.

The defence counsel's objection was upheld by the trial judge, Justice E. Amadi.

DPP: You know why Ndure Cham did not succeed in the 2006 foiled coup?

Lang: Yes, I know my lord. Ndure Cham could not succeed in overthrowing the government, because we the loyal officers and soldiers stood up against him, to foil the coup.

DPP: You are telling us that you had the opportunity to become the President, when Ndure Cham left?

Lang: Despite the opportunity, my ambition was to foil the coup and not become President.

DPP: You are close to all the accused persons?

DPP: You are close to the 2nd accused?

Lang: I am not close to the 2nd accused. He had only worked under me.

DPP: As he worked under you, you are close?

Lang: We worked together on issues pertaining to Gambia Armed Forces (GAF).

DPP: The 2nd accused was very loyal to you in GAF.

Lang: He was not loyal to me; he supported me in my functions as the CDS of GAF.

DPP: The 3rd accused worked closely with you, and was loyal to you.

Lang: He was not loyal to me; he worked under me. In the Armed Forces, loyalty is always for the President and Commander-in-Chief of GAF.

DPP: The 4th accused worked closely, and was loyal to you.

Lang: No, he was not. He worked under me.

DPP: You are close to the 8th accused?

Lang: We are friends.

DPP: You play football with the 8th accused?

Lang: Yes, we play football together with others.

The case continues today at 1 pm.