The President is touring the country at the time when farmers are entering the farms for yet another cropping season.

As he meets with farmers, we encourage them to not only sing his praises and that of his government, but to tell him their concerns.

We are not discouraging people from praising the President, but they should take the opportunity to frankly discuss their problems with the President some of which might not be known to him.

As such, the farmers should be bold enough to spell out their problems to the President, in order for his government to do something about them.

Problems such as the poor feeder roads network, a lack of clean water in many communities, cattle theft, cattle encroachment on to farmland, land disputes, a need for farm inputs, and the high cost of living, among others, are all serious problems hindering the development of the country, that the President needs to know about and be reminded of.

Those selected to address the President at meetings on behalf of communities and various interest groups should be allowed to do so without any restriction by local authorities.

Many Gambians, especially those in the rural areas, do not have the chance to meet with the President.

That was why the constitution provided for him to go on a tour of the country, at least once a year, in order to meet with the people, to see for himself and hear first-hand their requests for help to improve their living condition. 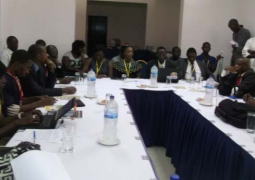