The Western Region outfit, Makasutu have registered its first three points in the female division one league championship over fellow strugglers. The side laid a hard fought battle and went home with a 2-1 victory.

Goals from Makasutu's duo Isatou Johnson and Ida Touray was enough to give the Brikama girls what could be regarded as a make-up for the numerous lost they went through in the hands of tough opponents like Interior, Company Ten, Red Scorpions and Abuko United.

With three points now  the side is still struggling at the bottom of the table, but if the  word of the head coach of Makasutu Abdou Latif are anything to go by, then his side will leave no stoneunturned in their efforts to maintain their place in the country's top flight female league next season.

"I am very much delighted to collect my first vital points in the league. So far, this is the day we have been preparing for and thank God we have achieved our ambition, Pointsport quoted Abdou Latif as saying.

The determined coach went on to say thatMakasutu have always proven to be a better side than Kinteh's United, considering the fact that they have collected3 winsin five games played between thetwo sides over the period.

Meanwhile, the team manager for Kinteh's United, Sanna Jarju completely disagreed with the comments made by Makasutu's coach.

He said "my team conceded lesser goals than Makasutu and I can assure you that we will maintain out position in the first round".

Sanna also spoke about the need for referees to remain fair during matches.

In the second division league, Futurebi were held to a goaless draw against City Girls on Sunday. 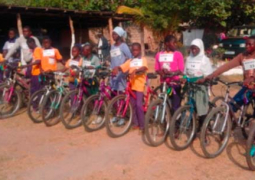