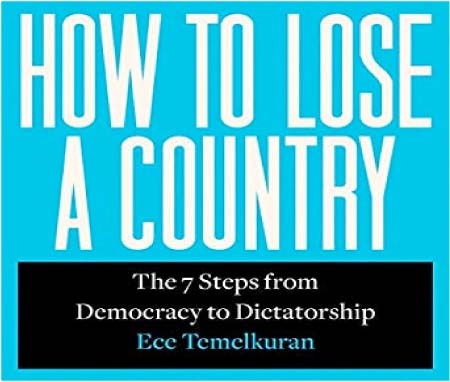 A little while ago a friend asked me if I thought that we were living through what in years to come would be discussed by A level history students when faced with the question Discuss the factors which led to... I agreed that she was right and wasn’t certain whether it was a good or bad thing that we didn’t know what all ‘this’ was leading to. I think now that I do know. We are in danger of losing democracy and whilst it’s a flawed system I can’t think of a better one, particularly as the ‘benevolent dictator’ is as rare as hen’s teeth.

Ece Temelkuran is one of Europe’s most prominent political thinkers. If you are on the right you won’t agree that she’s well-regarded and if you’re on the Turkish right wing then you’ll probably believe that she should be in prison. She’s not watched Turkey slide into dictatorship under Recep Tayyip Erdogan with rigged elections, cronyism and the imprisoning of those who oppose him: she was involved in the resistance and has given us what amounts a field guide to the mechanisms of the far right populism which is sweeping the globe. We’re shown what happened in Turkey and we see the parallels as they happen in a wider context.

There’s a soundtrack to what’s happening and even having read Temelkuran’s book I’m conscious that the words creep into my mind. It’s the phrase it couldn’t happen here. People said it on the day of the Brexit vote. American friends said it as Trump supporters chanted build that wall, but he was still elected. Wherever ‘here’ is, we can no longer be content that it won’t happen. We must be aware of the signs and we must act before it’s too late as nationalism isn’t an option which will be presented to us at the ballot box, but a movement which creeps into our lives insidiously.

The writing is impassioned, but with stunning clarity of thought. It’s eloquent and very readable: frighteningly so, in fact. I ceased to be reassured that Trump is a clown and surely can’t last, or that Boris Johnson is a buffoon who surely could never be elected as I read about why they do what they do. There is method here: diversionary tactics to cover a real purpose. Perhaps the main points which I took away from the book are that one should never underestimate an opponent, or believe that just because groups see themselves as real people and infantilise political debate, they do not have considerable power. As for how the book left me feeling, I’ll confess that it was ‘depressed’. The book is stronger on the symptoms of the disease than on the cure and I felt impotent to help the country which I’m leaving to my grandchildren.