Ken received an indefinite suspension from the FA when his side met Armed Forces on . This preventing him from playing football at both club and national level.

Fans and football pundits stormed the premises of The Point yesterday to express their dissatisfaction and called on the FA to revisit the decision of suspending Ken indefinitely as his services are deeply needed at the national side.

According to Ebrima Conteh, alias Valdo, Ken's absence has been clearly manifested during the Scorpions outing last weekend. "He is a very disciplined footballer and I have watched him play for many years. I think his action in attacking the referee were a mistake and the GFA should now consider revising the suspension," he explained.

"Ken is a very respectful player and I believe because of this he has been team captain for The Gambia numerous occasions. I was a football player and know how players lose their temper in a game but we all believe that it was a mistake", he added.

Pointsports contacted Gambian coaches to shed light to the issue and this was what they said.

In this comments Peter Bonu Johnson, Ken's former Coach at U-20 level, said he knew Ken as a calm player, with respect. He said, "I don't know what happened to him on the day of the incident, but he is not that type of player. He is aggressive in the field of play but not this type".

He said Ken played during the qualifying round of the U-20's and did not get a single card. "The FA should help him and look into his records and forgive him for the betterment of our football.

Coach Alhagie Sarr of Sea View described the player as one with a bright future ahead of him. "We know he made a mistake, but he should not be banned indefinitely, because it could deprive him of football," he added.

He said he used to communicate with the player and has all the proof that he regrets what he has done. " I hope he will send a letter of apology to the FA for them to also look into it in order to lift the ban"

Ken's team Coach Sang Ndong said since the player was banned he has been missed both at National and Club level. "He is a highly disciplined player, he made a mistake. He is not that type of player, we spoke to him and told him that what he did was a great mistake, which he accepted", he pointed

He said, "But we are appealing to the FA to reconsider the move as he is calm and quiet in nature and not the type of player that attacks match officials".

Coach Ebou Faye also said that what Ken had done is totally wrong as he was the captain of the U20 team. I think the FA should look into it and forgive him. He is a disciplined player and very calm. This is just a mistake he made and he realised the mistake he made and appologised to the FA, the referees and the general public at large. The FA should revise this decision and forgive him.

The coach of Interior FC, Ebrima Manneh, has also expressed his view on the issue. He said that the FA have done what is supposed to be done to tell the public that no body is above the law. He added however, "we all know Ken he is very disciplined and comes from the most disciplined team; Hawks.  I think the FA should look into the dedication of the boy and forgive him. He is young and has only football in future if he is banned indefinitely, it would disturb him. I think he has done a great thing for the nation too, he was injured and had sacrificed himself for his country and he has regrets for what he has done". He said he will be the first person to support the idea of forgiving the boy.

Honourable Coach Alhagie Sillah congratulated the FA for the decision taken. He said this shows that discipline will be exercised in the field of football.

"Though it is very hard to change the decision, I am appealing to the FA to pardon him as we are all one family and human beings are bound to make mistakes," he added.

The Managing Director of The Point Newspaper and Veteran Sports Journalist Pap Saine said football is all about discipline and players should exercise discipline on the field of play. He called on the FA to exercise flexibility to the player since he has apologised to the FA and the nation at large.

When Ken Ma Lamin Jammeh was contacted, he said he is fully aware of the need for a player to have maximum respect in the field of play. 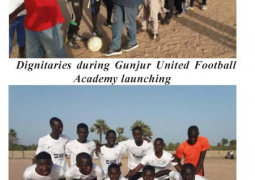