The National Training Authority, NTA, on Wednesday held an award ceremony known as support employer of the year award ceremony, held at the Sunswing Beach Hotel along Senegambia.

The award being the maiden edition and envisage for continuity on a yearly basis was meant to recognise the support of both the public and private sectors to the industrial training/attachment.

Speaking during the ceremony, Mr. Jerreh Sanyang, who deputised for the Minister of Higher Education, Research, Science and Technology, thanked the NTA for the laudable initiative.

He expressed hope that the move will strengthen the very cordial relationship with employers, who continued to support the industrial attachment programmes, by providing platforms to students transiting from academic institutions to industrial training.

Mr. Sanyang further stated that the efforts and resources committed consistently on the development of industrial training is not only a matter of restructuring skills training or the redefinition of its functions, but the human factor which most be developed and improved to achieve the set national socio-economic development goals.

While stating that the NTA had benefited from The Gambia Government/EU partnership in the form of technical assistance, with a team of 4 experts whose terms of reference was to make recommendations for the transformation of Technical Vocational Education and Training (TVET) and TVET related activities, in line with international standards, Sanyang said, the scope for enhancing employment opportunities, through the expansion of the private sector and self-employment appears to be a formidable task. But he was quick to say that the major challenge facing the country is to harness training requirements to the needs of the economy.

He added that education and training is the means to empower people to become agents of change, take charge of creating a future that corresponds to what people value and need most.

For her part, Naffie Barry, Permanent Secretary, at the Ministry of Trade, Industry and Employment, said their resolve is to strengthen the recently ended GAMJOBS initiative which has crosscutting issues with skills training.

She said training is the process by which employees acquire the capabilities to perform their jobs, which she said, is viewed as an essential part of performance and retention of any successful business.

She also said in effect, employees will not reach their full potential and achieve higher levels of productivity unless they are adequately trained to boost organisational competitiveness in terms of quality which will also positively impact on revenue.

Edrisa M.N. Kolley, officer-in-charge of NTA, who commended the stakeholders and partners in technical and vocational education and training, said the role employers play in capacitating the national labour force is immeasurable.

Mr. Kolley said the NTA hails its partnership with employers without whose participation, internship would have been challenging.

He said the internship is meant to expose students to the practical components of their studies in real life situations.

While the distinguished employer of the year award went to Medical Research Council, the private sector award went to NAWEC and BB Electrical and Construction Company, respectively. 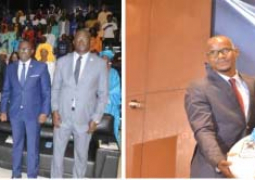