In his opening remarks, the acting Chief Scout Commissioner, Mr. Ousman Y. Jatta, said the centre is one of the projects of the Gambia Scout Association (GSA), which he said, is a component of its community development programme.

He disclosed that GSA is a voluntary education youth movement, that's open to all young people without discrimination of origin, race or creed.

He further revealed that GSA have a membership of 216 countries that comprised membership of 28 million youths, thus making it the biggest and the most popular youth organisation throughout the world.

According to him, scouting started in the in 1921, and that it was first enacted by an Act of Parliament in 1944. This, he added, was subsequently amended in 1984 Education and Culture Act.

The mission of scouting, he went on, was meant to contribute to the education of young people through a value system, based on the scout law that promised to help build a better world where people are self-fulfiled as individuals and play a constructive role in society.

"The national youths policy and programme is one tools that scout use to satisfy the challenges and needs of our country. We define community as an educational process of change, based on collective action taking within a community and leading to better life," he said.

Speaking earlier, the Co-ordinator of the Centre, Mr Amat Sowe applauded the 44 graduates for their hard work during their stay in school, urging them to keep up the momentum.

He challenged the students to seriously partake in carpentry, welding, electrician and tie and dye so that they can become self-employed.

For his part, the Permanent Secretary at the Ministry of Youth and Sports, Mr. Mam Mbanjick Njie congratulated the graduates for their hard work, noting that knowledge is the key to success. He added that skills centres play a significant role in the development of young people. 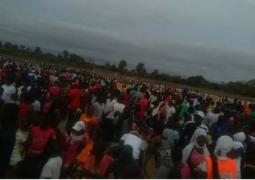