A heavy downpour accompanied by heavy storm and lightning reportedly killed an 11-year-old in Basse Samba Tako in the Upper River Region over the weekend.

Kalilu Jallow, a native of Samba Tako village, was reportedly sitting on his bed when flames caused by a lightning started in the house, burning the bed sheet and mosquito net.

According to an eyewitness, the incident happened when the mother of the deceased, Fatou Manneh, was nursing her week-old-baby in the same house.

The witness said, as lightning struck, Fatou fell down and went into a state of coma.

"Following the incident, they were rushed to Basse major health centre, where the 11-year-old boy was pronounced dead," the witness said.

Speaking in an interview with this paper, the father of the deceased expressed his shock over the sudden death of his son.

He added that he has accepted it in good faith, and prayed for his soul to rest in peace.

The rainstorm, which lasted for two hours, was also reported to have caused serious destruction to life, property and foodstuffs in more than 30 communities in the Upper River Region. 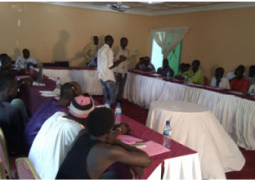