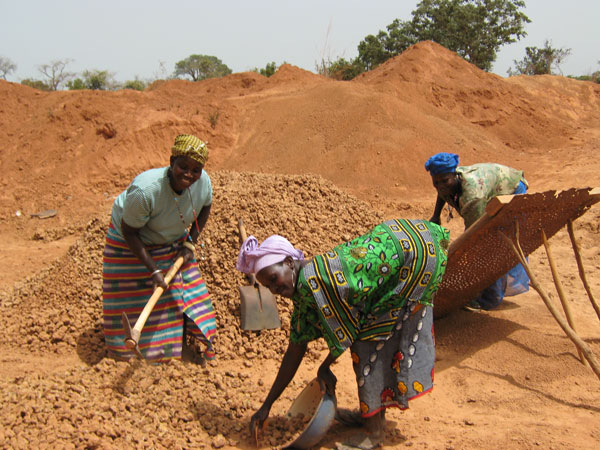 Sotokoi, a village located few kilometers after Faraba Bantang in Kombo East, Western Region, is now well known for selling gravel thanks to the women folk of the community.

Our reporter on Tuesday traveled to the village to see how the women are struggling with the business.

In fact after the visit she realised that Sotokoi is not alone in the business but Faraba Bantang is also full engaged in the job. The two villages are among the places where gravel is dug and sold to urban areas for construction.

Many would be surprised to know that such a heavy job is mostly done by women by using tools like spades and pick-axes.

Mrs. Sarjo Manjang, one of the women in Sotokoi at work, told The Point, that she first started in Faraba Bantang where she worked for two years before moving on to Sotokoi. She revealed that there are still a number of women in Faraba Bantang doing the same thing for their daily bread. Khadijatou, a fellow woman, lamented that the job demands more manpower than they can give thus their production is not as high as they want it to be.

According to the women, the sand mining is their main source of livelihood.

"We dig the hard red earth and separate the powder from the gravel ourselves, and that is our daily routine, and we are not here for a picnic," she said.

Alonso Bojang, a fellow woman, told this paper that from the meager pay they earn, they have to deduct the pay of the men who cart off the gravel to the lorries when it is being paid for and that virtually leaves them with nothing to take home to the family.

She said that the work is no picnic, but was quick to say that when they go back home they are always exhausted.

The women appealed for modern tools suitable for the work as well as a temporary shelter that can save them from the heat of the sun under which they work for hours. They also requested clean water to quench their thirst.