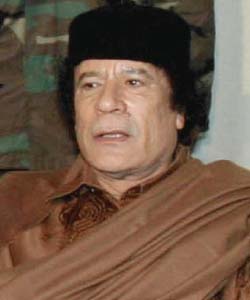 Information reaching this paper has revealed that the 3rd Africa-EU summit will be held in Tripoli, Libya, on 29 and 30 November 2010.

The summit, whose theme is "Investment, economic growth and job creation", will be held at the Rixos Conference Centre. Its central aim is to discuss concrete ways to create more growth.

In the opening session, statements from various institutions and bodies will be delivered. These include statements by the EU and AU Presidencies, the AU Commission and the European Commission; EP and PAP, and leader of the host country, Brother Maumarr Ghadafi.

The summit will also witness series of side events, such as the EU-Africa Business Forum, the Africa-EU Youth Event, Conference on higher education, and High Level Conference on Better Training for Safer Food.

Heads of State and Government will also address key issues such as peace and security, climate change, regional integration and private sector development, infrastructure and energy, agriculture and food security, and migration.

The 3rd Summit is a unique opportunity for Africa and Europe to demonstrate their ability to pool their efforts and to reaffirm their ambitious Lisbon commitments. The progress made in the eight thematic partnerships will be assessed three years after the Joint Strategy was launched. African and European Partners will also define the priorities of their cooperation in the years to come and will translate their ambitions into tangible actions to be contained in the second action plan.

The Heads of State and Government Summit is the most important political event within the EU-Africa relations framework.

Taking place among an intense political agenda - two months after the UN MDG High level meeting in New York and a few days before the Cancun Conference on Climate Change - the summit is a unique opportunity to reaffirm and strengthen the strategic relationship between Africa and Europe.

Heads of State and Government will also focus their discussions on key thematic issues of interest for both continents. They are expected to agree on concrete deliverables and flagship initiatives.

The summit is also expected to adopt the Second Action Plan (2011-13) of the Joint Africa-EU Strategy.

In the run-up to the summit, both sides decided to conjugate ambition with pragmatism. The new Action Plan will build on existing partnership roadmaps and take into account the experience and results of the past years. The initiatives in the plan will have a clear regional, continental, or global added-value and will contribute to the innovative approaches of the Joint Strategy - to move the Partnership "beyond development, beyond Africa and beyond institutions".

Some new initiatives into promising areas such as energy or public/private partnerships are also expected.

Partners are expected to make suggestions on the working arrangements of the eight thematic partnerships. While drafting the next Action Plan 2011 – 2013, both sides also aim at improving the operational efficiency of the partnership.

Given their role as building blocks of the African Integration, substantial engagement of African regional and sub-regional economic communities (RECs) is crucial for the Africa-EU Partnership.

Other actors, such as parliaments, civil society, or the private sector, have also been associated to the Strategy and are encouraged to pool their efforts for its implementation.

This inclusive approach beyond institutions will in fact materialise during the Summit itself. Similar to 2007, a series of side-events will take place in the margins of the summit, and will bring together representatives from all African and European stakeholders involved in the Joint Strategy (civil society, the youth, the private sector, trade unions, researchers and scientists, etc.).

The 1st Summit took place in Cairo in 2000. It was the first meeting at the continental level between European and African leaders, where both sides expressed their commitment to come together to give a new dimension to their partnership.

The 2nd Summit took place in Lisbon in 2007 and put Africa-EU relations on a new and equal footing. The two sides agreed to move from donorship to partnership symbolised by the first-ever Joint Strategy and to address together the new challenges and opportunities at the global level.