The 2008 Lamin Noran football tournament, organised and coordinated by the Lamin Noran committee, will kick off today Thursday 17th April 2008, at the Lamin football pitch.

The tournament will feature 11 teams, and is divided into 3 groups.

The opening of the tournament will feature Out law FC  who will lock horns  with Spiros FC.

Speaking to Pointsports the co-odinator Yahya Manneh said the aims and objectives of the tournament are to foster unity and understanding between the youths of Lamin and surrounding villages.

He revealed that the Jean and Biran Manneh, as part of the tournament, donated a giant trophy and 56 medals of gold and silver. 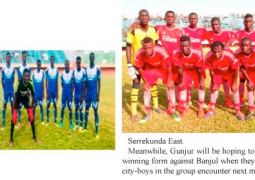