Kuluckochi Youth Development Association (KYDA), formed to support youth and other development initiatives, at the weekend embarked on massive road rehabilitation and clearing exercise in Gunjur Kulukochi and its environs.

Speaking to this reporter shortly after the exercise the coordinator of the association, Ousman Bajo, said the association was formed six months ago with the aims of empowering youth and also embarking on series of road rehabilitation and clearing exercise in Kulukochi.

According to him, the association has already rehabilitated few roads in the area that were in bad condition, as there was a time when transporting sick people from Kulukochi to the health centre was a "big problem" but such constraints have been surpassed.

"The association gives support to the youth of Kulukochi and will continue to do this kind of exercise every week in order to eradicate malaria in Kulukochi and its environs," Lamin Jersey, assistant coordinator of the association, said

The financial manager of the association, Ebrima Manjang, appealed to the private sector, donors, philanthropists and companies to come to their aid so that they can realise their dreams and aspirations.

For his part, the adviser of the association, Amadou Manjang, applauded the association for clearing the environment and making the area free from grasses and grimy as well as for embarking on a road rehabilitation exercise.

The work done would enhance the movement of people and vehicles, he said, calling on all and sundry to be united and to always show understanding among themselves to achieve their objectives. 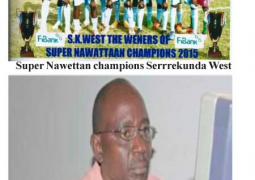