The trial of Abdul Katir Sillah, Banna Sillah, Amadou Gaye, Kebba Sawaneh, Balla Musa Conteh and Kadijatou Conteh who are all charged with the murder of Amadou Jallow, the then imam of Kuntuar in Central River Region, commenced yesterday before the Special Criminal Court of the High Court in .

The accused persons, all of whom pleaded 'not guilty', are charged with conspiracy to commit murder, murder, breach of the peace and destroying evidence.

Testifying before Justice Richards as the first prosecution witness, Dodou Sanneh, a police officer attached to the Major Crime Unit at police headquarters, told the court that he came to know the accused persons because of the case.

He told the court that he recorded all the cautionary and voluntary statements of the accused persons, except that of Kaddijatou Conteh and Kebba Sawaneh.

He said that on 18th June 2008, his office received information concerning the murder of the late Kuntuar imam Amadou Jallow from Kuntuar police station.

According to Sanneh, a team of police officers from the Major Crime Unit, led by Chief Superintendent Malamin Ceesay, left for Kuntuar for further investigation.

He added that they found the accused persons at the Bansang police station, and that during the course of investigation he was instructed by his commanding officer to obtain cautionary statements from some of the accused persons, which he did in the presence of an independent witness.

The case was subsequently adjourned to 2nd February 2010.

According to the particulars of the offence, count one stated that on 16th June 2008, at , the accused persons did agree to commit the murder of one Amadou Jallow, the then imam of Kuntaur.

Count two stated that on the same date, at , the accused persons caused the death of Amadou Jallow by stabbing him with a knife, knowing that death was the probable consequence.

Count three stated that the accused persons, on the same date, at , with intent to cause hatred, disaffection and contempt against the person of Amadou Jallow, spread rumours that Kadijatou was impregnated by the said Amadou Jallow, knowing that such action is likely to cause a breach of the peace.

Count four, which only affected the 6th accused person Kaddijatou Conteh, stated that on the same day at , the accused Kadijatou Conteh did commit an offence by throwing a SIM card into the river, knowing that it was going to be used as an item of evidence against her. 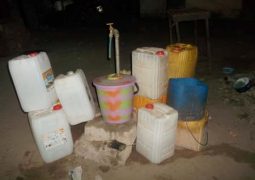