We would like to commend the Sports Journalists Association of The Gambia for successfully staging the third edition of the National Sports Award in the country.

The award ceremony for the first time brought prominent football icons like Elhadji Diouf, two-time African Player of the Year, Khalilu Fadiga, Alassane  Ndour , who have all made a mark in football across the globe.

The coming of Gambian UK-based athlete Nusrat Ceesay to witness this great event in The Gambia is also another plus for the SJAG.

Sport is a tool for promoting communication, unity and understanding among people, and it also brings peace between states.

The good thing about this award is that it would force others, who do not have the opportunity to win to try their luck next time.

Such awards would bring competition and sportsmen and women in the country to excel in their different discipline.

The partners without whose support the programme would not have been a success also need to be commended for their efforts in making the event successful.

This year’s award will go a long way in the history of sports development in the country, considering the high-profile figures in attendance.

Sport is all about bringing people together.

So people have to use sport to help each other.

This is the only way we can develop our sport.

We would also like to congratulate all those who won themselves trophies in various categories, including our own Cherno Omar Bobb.

It is good to recognize the efforts of individuals and institutions who contribute in one way or the other in advancing sport in the country.

Once more, we would like to salute all those individuals and organizations which made this year’s award ceremony successful. 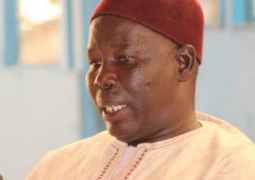