In a chat with Entertainment last Wednesday, he said his recent tour to the European countries was a total success, noting that he was able to meet with the 'movers and shakers' of the European music industry. The returned afro-manding artist revealed that his tour took him to , , , Austra and respectively. Jalikebba said during his tour he was able to attend European festival programmes, organising workshops with school children, and teaching the kora instrument to Europeans. During my tour I visited the National Television in where I was able to produce  lots of documents about the kora and also about The Gambia. The Gambian afro-manding  said during his tour, he produced a conbination of albums with other artists, and that the album is expected to be released soon. He also revealed that his 12-track album entitled Dinding-Malu was to be released soon. Jalikebba, in conclusion, thanked both The Gambian people at home and abroad for their support. He called on all sponsors to support him by sponsoring his album. For more information, you can reach him on 9325323 or 7711201. 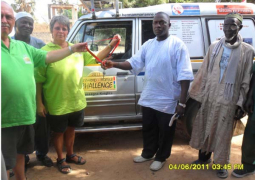