The tournament was organised in the memory of two former great players: late Kajali Badjie and late Ismaila Nyassi.

Tanji made a bright start to the game and created some goal-scoring opportunities, which they squandered.

Sifoe opened the scoring through Solifo Investment FC winger Ousman Sawaneh in the 48th minute of the game from a stunning strike to give his side the lead, which eventually proved be to the winner for them and let them now retain the championship title the third time consecutively.

Almamy Ceesay came very close to leveling the scoring for Tanji in the 65th minute of the game after slashing Sifoe’s defence line but the shot went wide.

Ceesay also came very close to leveling the tally for Tanji in the dying minutes of the game but his shot was denied by Sifoe’s custodian Modou Secka, thus the game ended 1-0 in favour of Sifoe, who have now retained the Kombo South district football tournament title for the third time.

Tanji finished the game with ten men after centre-back Abdourahaman Ceesay was sent off when he brought down Sifoe striker Moses Pereira.

As champions, Sifoe went home with a giant trophy and cash prize of D15,000, whilst Tanji received D10,000 as runners-up. 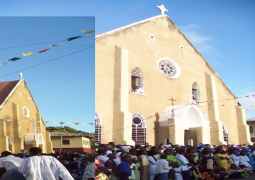