The Kombo South District Youth and Sports Committee (KSDYC) congress is billed for Sunday 20th June 2010, at the .

The congress will hear reports from the Chairman of Kombo South District Youth and Sports Committee (KSDYSC), Secretary-General, Treasurer and Auditor during their tenure of office.

This will be followed by the dissolution of the old executives and the election of another executive committee into office that will run the affairs of sports in the district for the next four years. 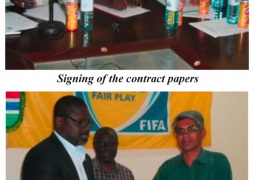