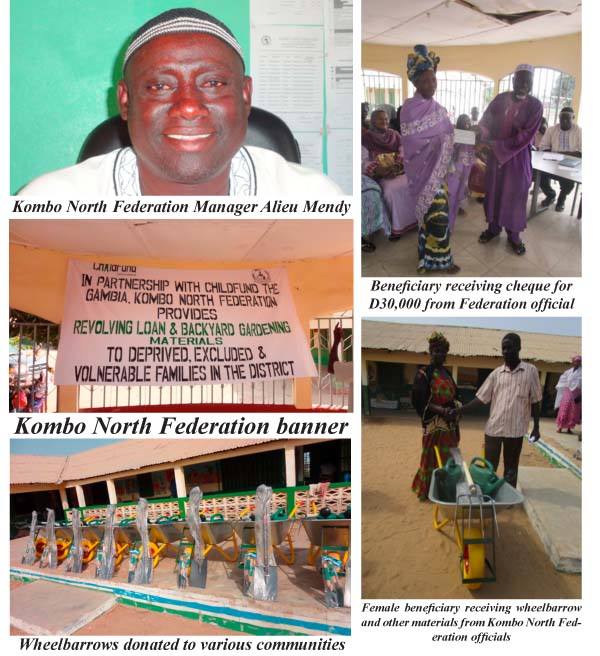 Kombo North Federation, an affiliated organization to ChildFund International The Gambia Wednesday disbursed cheques amounting to one hundred and fifty thousand dalasis to five clusters kafos in the Kombo North district of the West Coast Region towards economic empowerment of their families.

The Federation also presented backyard materials worth D50,000 to various committee association members who are actively involved in backyard gardening.

The Federation consists of five community associations namely, Bijilo, Banjulinding, Sinchu, Lamin and Makumbaya, and it is affiliated to ChildFund International The Gambia.

This is a new paradigm shift that the federation is now taking instead of supporting one child in a particular family.

All are geared towards economic empowerment of families by providing financial support to the families toward their businesses, which would yield a greater impact rather than supporting a single child.

Speaking at the presentation of the cheques held at the Banjulinding office, Alieu Mendy, the Federation Manager, said Kombo North Federation is a community-based organisation established in The Gambia and operating in Kombo North district specially to support the families of the deprived, excluded and vulnerable families.

He said among the aims of the Federation is to  help families in ensuring that their children have the right education; support them with health services, as well as try to create  some employment for the youths.

According to Mr Mendy, it has been an ongoing activity over the years, and the Federation had observed that supporting one child alone in one particular family would not make a bigger impact.

As a result, the federation decided to revive or modernise their approach to economic empowerment of families, instead of sponsoring one child in a particular family.

“The Federation is taking a new dimension through economic empowerment of families by providing financial support to these families, in a bid to improve their businesses that they are engaged in.”

The federation deemed it very fitting to support women in their backyard gardening to improve productivity and production, Mendy added.

He thanked the beneficiaries for their commitment and efforts in ensuring that these backyard gardens exist in their homes.

The monies given to the beneficiaries with no interest would be repaid within a period of one year.

Speaking on behalf of the beneficiaries, Buba Touray expressed his joy over the donated items, and thanked the Federation for the kind gesture.

He noted that giving them financial support would go a long way in improving their livelihood.

He assured the Federation through the Manager that the money would be repaid on time, and the items would be used for their intended purpose.

Mr. Touray also hailed the Federation for their continued support towards the welfare of families and their children.

“We are very grateful to the Federation and are calling on other federations to emulate the Kombo North Federation in the new paradigm shift geared towards economic empowerment of families.”

The Federation’s Board Chairman, Ebou Faal, also advised the beneficiaries to utilize the money and to ensure that the money is repaid before the deadline.

He also called on them to put the money into right places or ventures that would make an impact on their businesses.